Are there Text Based Online Casino Games? 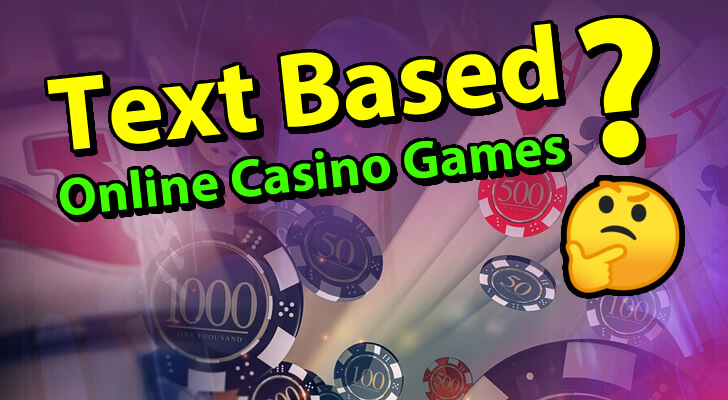 Online casino games are one of the fastest moving genres of games in the world. Over the years there have been many different iterations of these types of games. With graphics, sound and features all improving year upon year. One area where online casino games seem to behave in a different manner to regular video games is that it appears to have completely sidestepped the text based game genre.

Or has it? There are some examples of the online casino industry using text based features in order to engage players. While there are no fully fledged text based games on the market, there are definitely elements included in various different games that have come and gone. We're going to take a look at the limited number of ways that online casino games have used text based mechanics to create its games.

When the internet first started to make its way to the general public, it didn't take long for game developers to start experimenting. The first example of online casinos being a thing were in online chat rooms. Here developers would create text based versions of casino games, mainly card games. There were some slot machine simulators put out there but they were extremely limited by what a text based interface could offer.Â

These games all tended to be for fun and didn't include the real money aspect of online casinos today. But they were essentially the very same games that people play at online casinos today, just without a graphical user interface. With chat rooms being the most important aspect of the early internet years, it made sense that the text based casino games grew in popularity from here.Â

Over time a graphical interface was added to these games which ended the text based experiment. What's important about these games is that none of them were released commercially, so there is only anecdotal evidence that they ever existed. It makes the details and information surrounding these early text based casino games quite hazy.

What it does show is something that game developers have known for years. The underlying engine for almost all video games can be shown as a text based game. The development into more graphical based games mainly came as technology improved and allowed a more rounded game, but it was also pushed forwards by land based casinos which were developing their own video based games.

Despite the new technology seemingly ending text based interactions for online casinos, the story doesn't end there.

What came after on some of the first online casinos were chatbots. These weren't games per se, but they were still a fun feature that players could interact with. The chatbot was essentially a rudimentary AI that players could talk to and waste a little bit of time. They were programmed to respond in a number of different ways and could even offer a little bit of customer support if it was needed.

This was never really a game where players could earn money from playing, but it's still a way in which the traditional text based interface was used to engage players.

What chatbots tended to give players was the ability to interact with basic commands although obviously there wasn't an end goal like there would be with a traditional text based game.

Some Games still Carry Elements of Text Based RPGs

A lot of modern text based RPGs use a little bit of clicking to smooth the process a little bit. This is mainly achieved by offering text boxes where players can enter relevant values to the game. Some might see it as cheating compared to a pure text based game, but the hybrid option does make the game a lot more playable and accessible to people. This aspect is also utilised by a select few online casino games.

The games that tend to use this kind of interface come under the new breed of provably fair games. These are games that are created on much lower budgets than the more famous titles on the market, but have a number of variables that can be changed in order to show exactly how fair a game is when playing it. These variables can often be changed by using text boxes, just like in more modern text based games, which will then impact on the way that the game behaves. While they are still mainly played in the style of more modern games, the lower budget of these games means that they are heavily simplified and this text based interface is much easier to create and operate.

0 comments on “Are there Text Based Online Casino Games?”