Is Gaming All About Winning or Enjoyment? 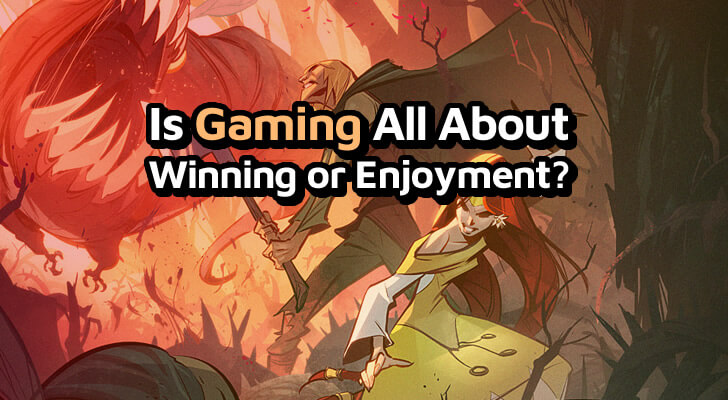 Gaming has become an internet sensation. All kinds of gamers seek the entertainment of online games. This includes a rather large database of players partial to social media gaming, online casino gaming or multiplayer campaign mode gaming. No matter the player’s preference, there seems to be a common question floating around the gaming community and that is, ‘Is gaming all about winning or is it about the enjoyment of the game?’ Let’s take a look to see where players draw the line and when playing becomes about winning or when it’s all about the enjoyment.

When You Play to Have Fun

Playing to have fun is something Granny Gertrud would do when playing games like Farmville. Nothing wrong with that, but in all actuality whomever said you had to choose between gaming for fun or gaming for enjoyment, well they must be banned from the gaming community. Why you ask? Anyone who has ever spent any time playing online games will tell you, the two aren’t mutually exclusive. They do go hand in hand. Playing games, whether online or console based, it should all be for fun and if the point of the game is to win, well then so be it! But have fun while kicking your opponent’s buttocks!

What to Play Solely for Fun

If you aren’t concerned with winning whatsoever, you will find there are some games which have been designed for the sole purpose of enjoyment, with no drive or rush to win. Examples of these games include notorious labels like the Sims or social media games like Farmville. These are incredibly popular games. If you take a look at Candy Crush or Soda Crush, you will see that there is no direct opponent to beat, rather a team of players you try to outrun and once again, indirectly beat. However, these games can be taken at your own leisurely pace and do not require the whooping one might expect from a first person shooter game. Although again, this remains a grey area as you aren’t playing against opponents but rather, you are playing against yourself trying to pass levels.

Another grey area is casino gaming. Why? If you were chasing a progressive video slot jackpot win, you would be playing for the win. However, you could play these same games but for free which doesn’t require any real cash deposits. Some players enjoy online casino games purely for fun while others chase the jackpots and do so for real cash and the win!

Check out free casino games or free mobile casino games for daily incentives rather than winnings. This is by far one of the most fun past times for online gaming enthusiasts.

When You Play to Win

Gaming is a competitive industry and players who play to win shouldn’t be judged, after all there are games intentionally created with winning as the aim of the game. As a matter of fact, there are a number of gamers who wouldn’t play any other form of game if the outcome wasn’t to beat the opponent, the time monitor or even the computer. This is indeed one of the most gratifying and satisfying forms of gaming known to mankind.

If you take into consideration the technology used by corporate gaming giant  Xbox Kinect or even DeepMinds AI agent, you could actually see the game being developed with the intention of beating your opponent. Games like StarCraft 2 have been designed to compete against real life players and beat them in sporting games or shooter games, depending on the game selected. The real life action shots, taken in by you playing in real life and the console using your body as movements in the game, can be absolutely thrilling!

There are notorious gaming competitions that take place around the world. Gamers around the world link up and play in competitions in networks which have been designed to reward the winner. Competitions are often fuelled by cash prizes which are substantial amounts of money and can be life changing in any event.

Online casino tournaments are ranked amongst some of the highest anticipated games in the world based on winning. If you look at WSOP (World Series of Poker) you will begin to see how players form tournaments which are known as satellites. This will win them a seat at the table in Las Vegas and ultimately millions of dollars in cash should they win the pot.

Whether you are playing a golf tournament or a poker tournament, if you are on a golf game with work colleagues or you are at a friend’s house for a game of poker, the idea is to win. To in essence such games have indeed been designed to be solely based on winning and playing to win may not be the intention of all players involved, but there will be the few players chasing either the title of a winner or the prize that is awarded to the winner.

Online gambling has been the perfect example of playing to win. In fact, land based gambling began the trend of playing against other players, machines and the house. Now, in the modern age of gaming, gambling has morphed into something more substantial with AI starting to play a role.  It has become a game of wits and luck, designed to beat the odds, designed to urge the player and ultimately to win for a reward.

So as you can see, whether playing games for enjoyment or for winning, it needn’t be one or the other. Winning and enjoyment go hand in hand and there is nothing wrong with enjoying a bit of both worlds. Depending on how you view the game and how you want to play, you could be playing for enjoyment or to win or a combination of the two. Many seasoned gamers will express the reason why they game is for the sake of enjoyment and while gaming is having fun, fun is also beating your opponent or the game and leaving them in the dirt! Can’t say there are many who would disagree!