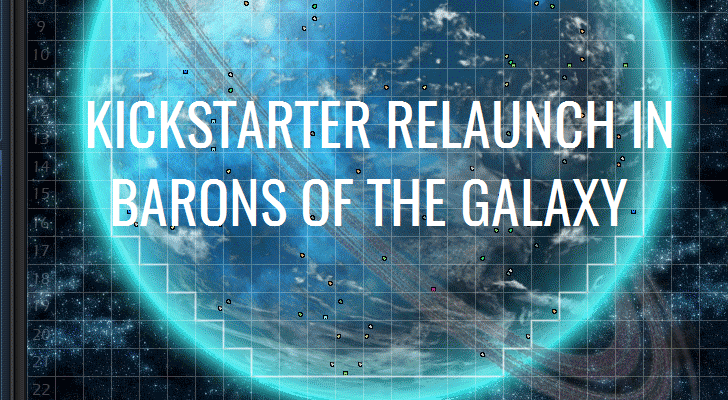 
Re-launch of the Kickstarter campaign

The game has only been playable in Beta Test for a couple weeks but the response from beta testers has been mostly positive with the only complaints revolving around the units requiring a lot of clicks and orders to do seemingly simple things. Also, unlike other games of its kind it does not use a “tick” system where everything you do gets its own timer to completion, instead the entire game is turn based where everything and everybody moves and produces every 10 minutes. This 10 minute timer makes starting out with the game seem terribly slow as the tutorial is only asking you to do one simple thing at a time but you have to wait 10-20 minutes to see a result. To be fair there is a lot more to manage after a couple days and it is advertised as a “played offline” type of experience not a “click all the shiny buttons until a paywall shows up” kind of game.


The beginning of the great adventure

Slow start aside, you will begin your adventure by planting your Corporate Headquarters onto a recommended location in Sol System and begin mining and selling your selected type of starting resource, like Farming Pork!. While the game boasts 150+ different products most of them require the production of component products first, which can also be sold as is, and then use those to make end products. While those are potentially more lucrative products they require several different structures and some transports running around to pull off. In the early game it’s best to stick with the few different products you can make with your first structure until you get the money flowing in.

You get cost reduction bonuses for anything in the same location as your Corp HQ, these are in addition to a tech bonus you get for specializing into certain product or categories as you level up your corporation. It may seem straightforward to specialize into a single product, sell it to the city you are in, and upgrade production so you can make more of that product to sell but that shiny wheel of profit doesn’t spin smoothly for long. As you sell more and more of your specific product to the city you are in the price will start to fall as you overcome the cities natural demand rate for it. This slowly puts pressure on you to sell to the other nearby cities via transports. This is further complicated by the fact that the fields resource you are mining has a threshold of production before it becomes “overcrowded” and starts to incur an increasing cost penalty on every structure mining it at that location. This overcrowding is caused by all the players mining that resource and not just you. The overcrowding mechanic is also what makes the value 14 fields resource 2 spaces away with no one mining it becoming more profitable than the value 16 resource you are on that is running a 20% overcrowding penalty. The simple act of selling tasty pork to every city in the solar system quickly becomes an engaging and somewhat strategic game of managing profitability against not just the game system but the other player’s involved.


Closer look at the event system

Half the game is manufacturing and selling and is entertaining by itself but the other half of the game involves the event system which can potentially be something special. Random events are constantly happening on a city, planet and system wide level. These events usually allow the players involved to vote on an outcome which have varying effects. There are currently only a handful of event types such as the certain products in demand, raider units looting nearby structures or voting for or against dangerous “fads” but it sounds like a lot more content with a lot more complexity will be coming once the game is fully developed. There is a lot of potential in the event system because it can involve the players themselves influencing a “choose your own adventure” style event happening in their area which would be a great break away from the strictly business of the trading game.

Game in Beta right now is looking good - a few features are still under development which will generally enhance the game experience and polish the UI a little overall the game is really enjoyable as it is right now.

A very interesting logistics and economic model where you need to balance growth of your markets by supplying the right goods at the right time with vs the need to make a quick buck (which can crash a market) vs long term sustainable income...

Which you could achieve... if it wasn't for all the other companies in the galaxy eager to exploit valuable resources and which might decide to crash those pet markets you so carefully developed as your cash cow over time...

But that's where you can jealously guard your markets with your elite battlesuit mechs ready to tear away any rogue traders coming your way... unless they come with an invasion fleet to make you tremble, better find some friends fast!

Things are just starting to get fun!