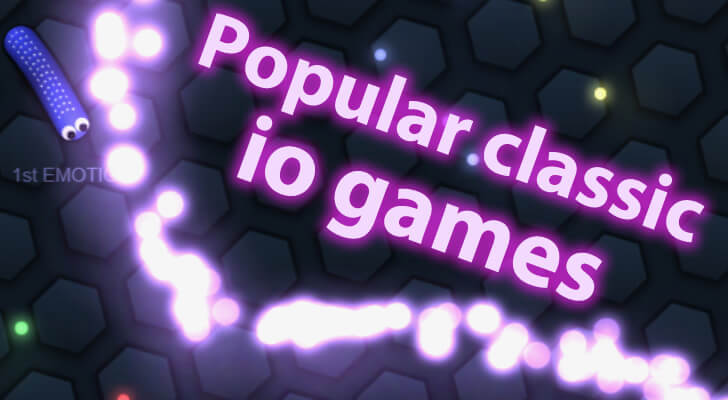 The peak of io games was at August 2019 and some of them are so good that even almost a year later people are still addicted to them. The io game has many definitions, but they all share the same principle. In io games you can get into multiplayer with a single click. You enter the game website, maybe pick a name and you'in, there is no signup or character creation, just 1 click away from multiplayer. This is a fun way to spend the free time we all have now. There are also other exciting ways you can spend your free time. If you are looking for more ways to kill time you should look into gala bingo promo code to try out your luck. You need luck in io games as well, when you die in io games games, you start all over again and in some rare cases you may get some benefits depending on how far you were able to reach last time. Just like regular browser games, io games can be played via any device - PC, tablet and mobile.

Idle games and io games are somewhat similar. You can get into the game fast, without any signups. They are also both made to be very addictive. Idle games however do not have multiplayer option in them. Another obvious difference is that in idle games you can progress through the game without actually playing it. In io games you constantly have to focus and play it to progress. The last difference between them is that in io games you can die and lose your progress, but not in idle games. Both are fun, but it comes down to if you are a lone wolf or not.

Agar.io
Who doesn't know this Agar right? You feed of other players to make yourself bigger, just like a Fishy game that everyone was playing way back. As a small circle you navigate and try to find other players that you can demolish. If yours and the other player's circles touch, the bigger one will get bigger, smaller one will have to start again. So the smaller your circle the more running around you have to do to avoid other players. The bigger you get the more you can start chasing other players to eat them. If you end up eaten by another player, simply get back into the game and try again.

Slither.io
A similar idea to Agar.io, but in Slither you are a worm, you feed of of crumbs and avoid running into other snakes. If someone runs into you, they die and you get to feed from them. You are also able to move faster if you hold down your left mouse button. The fun part of this game is that small snakes can demolish larger snakes as well all you have to do is cut them off. This can be very rewarding if you can take down a big snake early on.

Skribbl.io
Skribbl is a fun drawing game. Each round every person can pick a word and draw it. The rest of the players have to guess the word. The faster you guess, the more points you get. In addition if people guess your words you get more points as well. This game really pulls you in and connects you with other people. If you enjoy drawing this is surely a game for you.
Sharing is caring