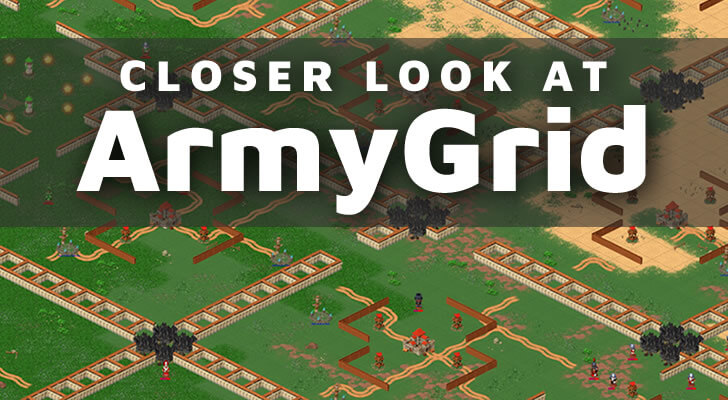 We are glad to share ArmyGrid's future plans and developer thoughts with you. Below you can learn about the life of the developer as well as what the game's goals and plans are.

I have a normal daily job as a web programmer with Rails. And a family of wife and 2 kids - with them I spend my evenings after work. And with the game I work after 21h , and Sundays. I had 1 Kid, but on 2018 November 5th born my second child - a boy.
So, I took a month paternity vacation for the whole 2019 January, took a place in coworking office and working full-time with the game - bumping up the navigation system. Making it polished, but not enjoying much about it. I am programmer and don't like to do graphical stuff. And only the responsive navigation is not possible to be done by only artist - I have to set things in place and balance the navigation look for all screen sizes. Much coffee, partly good sleep (because of the new crying baby) and I can do the hard stuff. And only in the office, as in home I can do only the fun game programming.

Currently, there is probably 90% of features already implemented, must-have features of any MMO games. Still many ideas in my head, but prioritized now on polishing up the game. It wasn't possible to do anything earlier, nor to release earlier, as I had no opportunity to take a loan for art earlier. Now loan is taken, art is in progress and soon to be finished (according my plans, in February should be finished).

Still working with the game everyday and it's not finished just yet, but planning to launch an early alpha in Kongregate hopefully in March. Also gonna keep current game as a test version in armygrid.com domain.
Working with the new design and spent a lot money for graphics of the 2.5D version, but still keeping the old 2D version as an option.

So, about the release - Hope to release in Kongregate at 640x480 screen size, as I found this is the most optimal. Its a small size, but the best for Kong. And my new navigation will look best now for that screen size. I hope to be finished in February but leaving extra month for bug fixing. If it goes well, and will be released in March, then I will test the game hopefully with more than 5 concurrent players as I ever had! The game theoretically should be very well in performance, as I did the game core rewrite 6 times for the best possible performance. The problem with performance I had - that in a big screen I need to load more than 2000 objects from server every 500ms while moving the map. Before a year I did it in 20 seconds. Then I was experimenting many different ways and ideas, until I reached a optimal speed - 100ms to load all that many objects. Of course, usually players are loading like 300 objects while dragging the map screen, but I am prepared for the worst!

There is 1 artist working for the game assets, a very good and hard working man from Belarus. When I was looking for someone in Upwork(upwork.com) who could do some art for very cheap, only the one Belarussian accepted. And did very well, very fast and very nice. So, he had the next small jobs from me later. And now he got this new job - to do all current 2.5D designs, for nearly 10k eur. I could choose among other 50 artist who were very willing to do the job, but only this Belarussian got everything, and enough time to do.

Player starts with a castle and some gold, which needs to be used for buying new armies. When a new army is deployed from castle- this army looks like a chess figure in a map and can move like a chess figure. Movement takes 30 seconds to complete and is in real-time. Player can control unlimited amount of Chess and move them all at any time, if they did finish their movement. When army attacks enemy army - player can see animation of army fight. Later with huge armies it looks awesome.
The armies (aka Chess) can spread the territory by occupying every single grid tile, and increase hourly gold income. Gold grows Idle, by being offline too.
On occupied fields Chess can build towers and walls to protect the territory from other players and NPC.

Player has limited actions during a day. Action - is a movement in map, build, destroy or upgrade. With every action in map, there is a NPC, which does counter-action by attacking player castle from a nearby NPC (black) castle. Player gets points for every survived action. But if NPC reach the castle, player loses a big amount of those points. With more points, player can unlock stronger chess figures, and increase maximum army size in Chess. 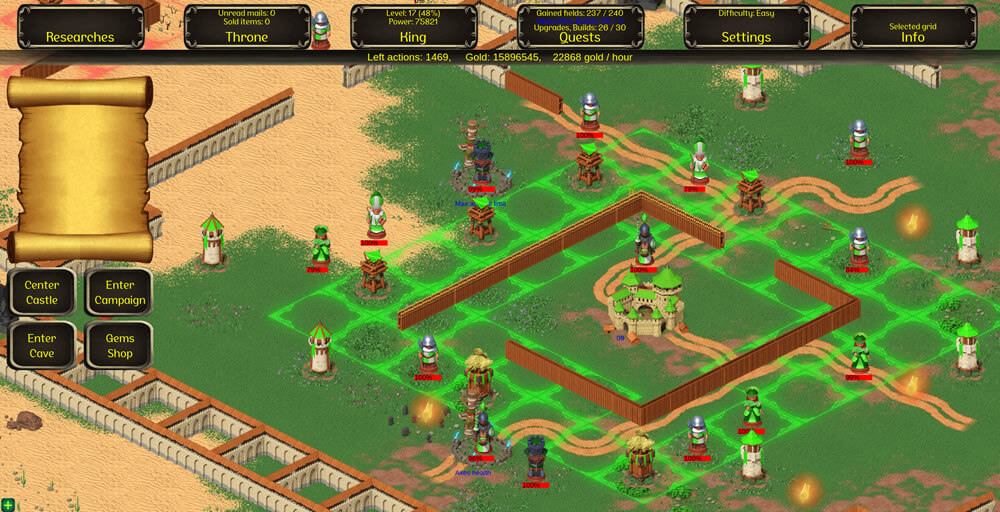 There is also a difficulty level implemented. Player can play forever on easy level, but he will never unlock stronger chess figures. By playing on Normal level and reaching certain amount of survived points, player unlocks Bishop. Hard level - to unlock Rooks. And Epic level to unlock Queen. Player cant have King.
Every Chess has its own ability. Pawn is the only figure, which can destroy structures - walls or towers. So, there is not easy to destroy other players fortresses. And max armies inside pawns increases by conquering more Fields, not by surviving.
Knights - can have the biggest max armies inside. But their bad side - knights move like in chess - difficult and movement can not be improved. Like bishop or rooks - they are most balanced. Not too big armies, but easier to upgrade the chess itself - at start chess moves by maximum 3 fields. By reaching more survived steps, player can unlock maximum move by 4, 5 or 6 grid tiles (aka steps). And finally queen - is the hardest to achieve chess. With queen player can move very freely, as it has bishops and rooks abilities in movements. But queen starts with 2 steps count, and there is very hard to upgrade up to 5 steps movements. 6th step is hardly possible for non-hardcore player. So, with stronger chess figures player can spread hes territory much easier and faster, catch enemy player pawns and complete various quests and campaigns. player can choose which chess figure he wants to upgrade most, as he can play with the only selected difficulty level at once, but also can change anytime.
But the hard side - that stronger chess figures requires bigger minimum army size, thus requiring a lot of gold to be deployed from castle.

By reaching a big amount of conquered fields, player can reset the fields, get ~90% of the fields income and start over with fields conquering. Its like a safe-zone, when player can not lose the fields, and with starting over is easy to spread when spreading near the castle. Here are many goals to reach, many quests. Mostly players try to do daily/weekly//monthly quests, as they give good amount of rewards. As reward mostly is - gold. With gold player can buy everything. There will never be too-much gold. Gold can be wasted for armies upgrade system if too much. There is another currency - Skill Points, gained as rewards from quests. With them player can only upgrade armies. Action points are also like a currency. And the last currency is Gems - player gets gems for achievements, every completed quest. Player can also sell gold, action points and skill points for gems, and also buy them back. Its quite a free market. Monetisation is not complete yet and I will try to make it quite limited, to not be too pay-2-win. Normally, there wont be possible to be strongest with paying if the player is not active enough. After few weeks of gametime, player has like 500 action points daily. and if he cant spend them all in a day, others will outreach him badly. I am a gamer, so I know how hurts seeing that the game will have a monetization system, no matter what :) Buts its f2p genre. A free game, based on activity, not real cash. 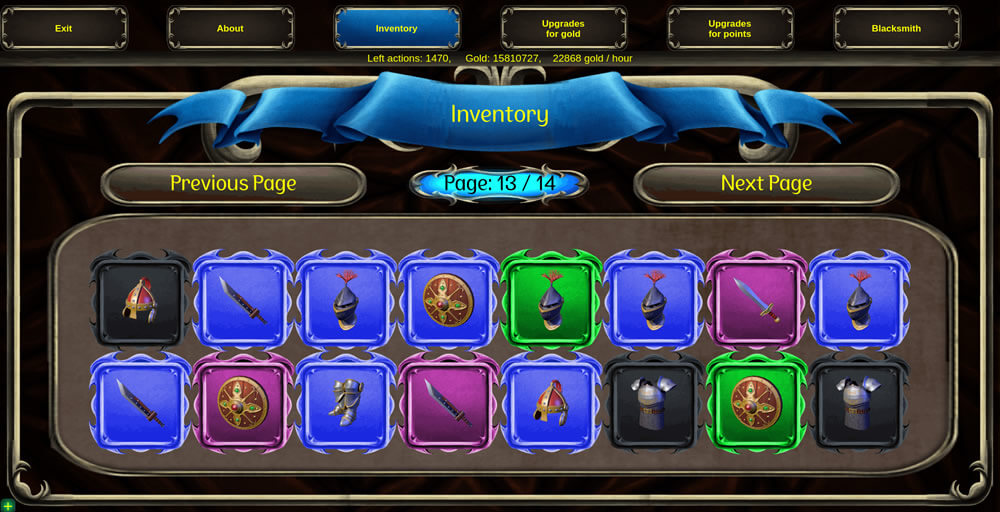 By killing NPC, players can drop various items. use them and increase army power. Also, there is a Market, where players can buy-sell their items for gems without Tax. Yes, they can resell items and its ok for me, as I love to do it my self :) The game also has alliance - in an alliance players can deploy their armies from allied players and spread from there, if the player allows that. This way ally players can help their members in PvP attacks when offline. The game also has a big logging system - in a morning player can see what happened during the night - maybe somewhere far away in map some other player did conquer many fields, or attack many figures somewhere in the map. Also, there is arena, where players can compete with armies and win prizes. There is also possible to attack the black NPC castles, increase their difficulty levels and get rewards. The NPC castles has no cap level, so player will never have too strong armies - to get better rewards always will need a bit stronger and stronger armies. The game also has a Campaign - logical missions in another map. In campaign player needs for example, to destroy 4 towers or kill 2 enemy kings. There are many ways to complete the campaign, but later in higher levels can be impossible with current armies, so with better brainstorming, it's possible to complete the hard campaign level with weak armies. There is also a third map - cave. There are NPC bosses. they just stay and wait until player attacks. The quest rewards in cave map are very good, but the map is reached only after the player level is quite high. So far the player level cap is 30. But none yet reached it. And the higher player level, the higher cap level have towers and walls, also unlocks new missions and areas. Level increases by killing enemy armies, with quests.

Here are described like 80% of all features the game has. I missed some. But there is what to do there, even without players. I had 2 players who played really long, for 1 month everyday, daily like 3-5 hours, without other players. Before few months, when i had a really bad design. I didn't know these players, they came from this site. I cant imagine how fun this can be with many players. I hope it will be. Still missing some features and balancing yet, but I'm nearly done. So far everything seems according to the plans.

1 comments on “Closer look at ArmyGrid”

Thank you for the time you took for this interview.

Your game seems very interesting (as I played chess a lot when I was a child).

Good luck for the future.