Crown of the Gods negative feedback 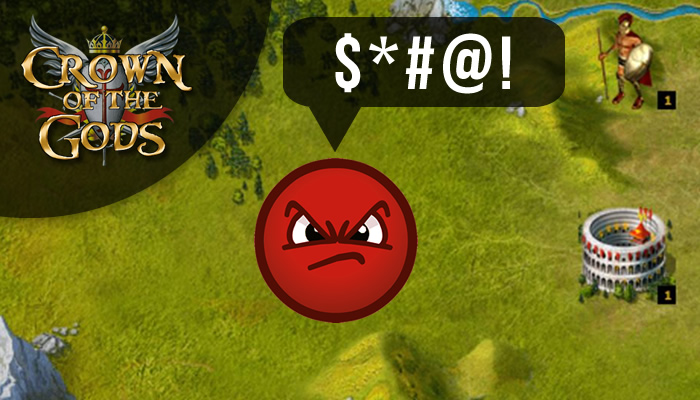 There is officially a bit of a scandal regarding Crown of the Gods. There is a user called "Peter Parker" who is bashing CotG by writing negative comments in various gaming sites, for example in NewRPG. Crown of the Gods was started as a Kickstarter project by Gaming Addict Studios. They were funded 100% and CotG game was successfully made. Players like the game a lot and developers are working hard to develop the game further. But not everyone has something positive to say about them. There is a certain person that is trying to write negative comments about them as much as he can. Lets try to find out why he is doing this and what exactly is going on.

What is he bashing about?

User "Peter Parker" is trying to make a big deal out of CotG company being dissolved for a short period of time. More exactly the fact that Gaming Addict Studios has not announced that fact publicly. "Peter Parker" thinks the company had some problems with the paperwork and shared this image:

Data taken from State of Florida, Department of State website.

But what "Peter Parker" does not know is that the dissolution was completely planned, and a standard operation. They were in no way late with any fee payment, or anything of that nature.

Why is he doing this?

The individual TerraTheBull/Peter Parker/Matthew Ottewell is more exactly a disbarred ex-lawyer living in Canada, with too much time on his hands. He is a fairly well known troll to indie games, who prides himself on the ability to shut down new and developing indie games for really no other reason than to be an a-hole. This is something he did quite recently on the Avalon Lords kickstarter, as well as on a few others in the past, all of which he brags about quite frequently.

The dissolution he's spamming about was planned and coordinated with the Florida Division of Corporations as CotG were changing their corporation structure. It was not something they needed to announce, as there was 0 interruption of services in any way to any of their players.

The individual TerraTheBull/Peter Parker recently played CotG game, and the day before he started trolling, he got beaten down quite badly in an in-game "battle". This could be the reason he is doing the things that he is doing. He also went onto the CotG player-run Wikia page, and deleted all the content that their players had amassed there, replacing the pages with slanderous messages.

"Peter Parker" has also contacted NewRPG via e-mail and said some snappy things. Once we told him that we would like to publish it in NewRPG, his answer was this:


Go for it! I seriously urge you to publish. Say whatever you want.
I'd urge you to sleep on it first. But it does seem that your mind is set, and that somehow you've convinced yourself that this is a good idea. Go for it! Select the best quotes you can!

As seen above, sarcastically cheering for publicity, it seems that Peter Parker is regretting the things he has said.

Is CotG game going down?

No, far from it, you may think that while reading "Peter Parker" comments, but this is not the case. Game is going strong, has lots of publicity and is actively developed further each day. Other people really like the game and have given very positive comments for CotG.The game was actually so good that they got 100% funded in 17 minutes at Kickstarter.

Now that you know why he is doing it and there really isn't anything bad happening in Crown of the Gods that is worth mentioning, ignore all "Peter Parker" comments as many already do. He is bashing the game without knowing the full story, what a shame. He is not doing all this professionally either, trying to be snappy to get people replying to him. Example of his cocky attitude below:

7 comments on “Crown of the Gods negative feedback”

The Game was made by a group of scammers that basically cloned the old LOU (Lords of Ultima). They also play the game with God accounts to force people to have to spend to compete. I loved the original game but the thieves who used it to make COTG are unethical cyber-bullies.

this game is in beta stage... i would wait if i were you. A ton of really good players left because of all the bugs there is.

Its a good game, we call it the "Lou Phoenix" cause its a replica of Lor of Ultima. Lou was way better and i was sad when it closed... like many players in here.

It gets so frustrating with all the bugs, ill probably wait to come back till it out of beta.

Why there is so lot of spam on your website?!
Where is exit?!

Heeh i know that peter parker, this guy is full of crap talking shit all the time for many great games and has too much free time and doesnt have a life.

Why is newrpg even promoting that person? and is it really an issue that deserves beng described and publishe at newrpg.com? It all looks like a joke.