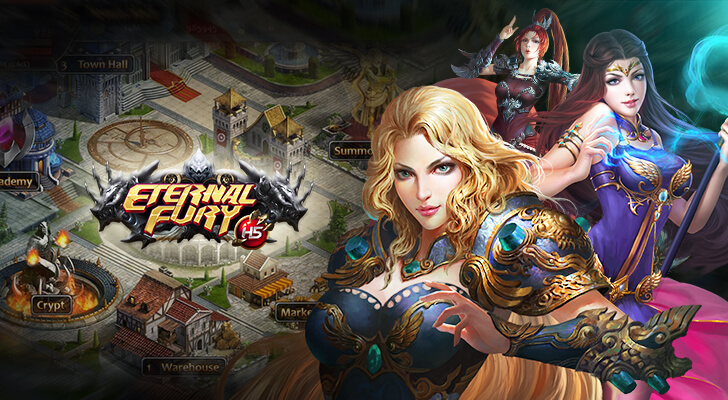 We are very excited to announce that the classic fantasy game Eternal Fury Html 5 has officially been launched. Eternal Fury has been re-designed with new cross-platform features and a HTML 5 version after four years. May 21, 2019 - Game Hollywood announces that the new cross-platform version of Eternal Fury (Html 5) has officially been launched worldwide with CreaGames and Kongregate, which are one of Europe's and North America's top game publishers. Eternal Fury, featured several times by Google Play Store and AppStore in North America and Asia in 2014, is a thrilling fantasy game. It has over 2 million users worldwide and has always been a favorite of the rankings.

Cross-platform Eternal Fury H5, based on the western magical style of the first-generation mobile game, retaining the classic gameplay and character system, adding innovative elements, mercenary summoning gameplay. Players can summon random acquisitions of different quality mercenaries and customize the base attributes of the mercenary growth system. Also, their unique mercenaries can be defined by the players and then match their exceptional mercenary team to enhance the game's strategy and playability

Eternal Fury (Html 5) allows players to experience the game on all platforms. It eliminates the need to install Flash to start the game, gets away the need to install apps and plugins as well as easily works with all browsers. At the same time, Html 5 also brings more screen and operation optimization and more free game experience for players.

Players will take the role of a lost soul. He was attacked and injured, and now he can?t remember who he is and what?s his mission? but will still fight for justice until he regains his memory back and discovers the plot behind the havoc that has aroused in the kingdom. In this journey, players will not only live a fun experience improving their skills but will also be accompanied by powerful mounts, mercenaries, will be a part of a war.

Eternal Fury is a free browser game running fully under HTML5, in which you will have to fight the demons plaguing your city and build your castle to strengthen your leadership. The game features 3D graphics, spectacular battle effects, upgradeable units, turn-based RPG action and endless quests to enjoy.

Expand your territories, finish your quests, fight lots of battles, join a Guild and regain your lost memories. Make yourself the leader of a team filled with the most powerful heroes to lead your kingdom.

Arena is one of the main PvP features in Eternal Fury. Players can participate in 1vs1 battles to reach the top of the rankings and improve their rank. They will also receive points and other rewards to help them to become stronger.

There are different functions and options that players can explore in order to upgrade their characters and become more powerful. Develop nor only your hero but also your servants, mounts, troops, buildings??

Apart from limited time events, players can challenge different dungeons to obtain resources. Challenging dungeons will give players experience, special items and all kinds of materials to improve their armors and weapons. Dungeons have different difficulties and are designed for all kinds of players. They also are a great way to get used to the battle system and find the best strategy.?

The 3D rendering engine works as its best with the battle effects and high-quality graphics in Eternal Fury. Characters, maps and buildings are retendered in 3D and give the game a fantasy atmosphere. There?s also a great variety of mounts, mercenaries, costumes? that will make customization easy and fun for players.?

Game Hollywood is an international online game company with offices in China, Europe, and Montreal. They specialize in innovating operations and strive for a perfect balance between content, gameplay and storyline.