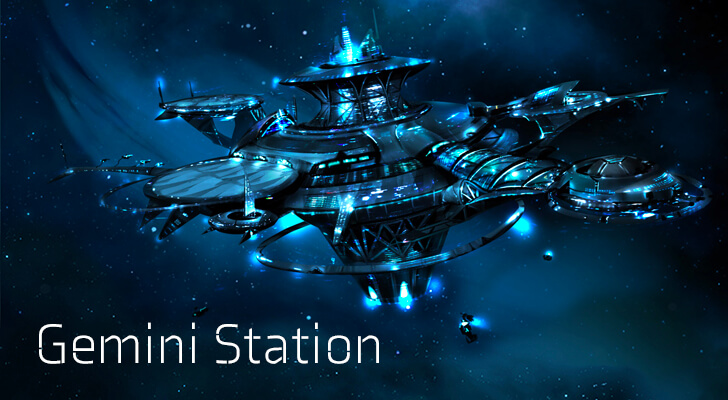 Admittedly a text-based game, this free, online space RPG seems anything but. With stunning graphics, travel animations, and a fully immersive world, it's easy to forget that you're actually playing a text-based game.

The core principle of the game is simple: make money, level up, find cool gear.

A sci-fi space trading game, Gemini Station takes a simple concept "acquire goods and sell them for a profit" and turns it into rich, multi-faceted, dynamic universe.

How you acquire those goods is entirely up to you. Some players keep to the market, watching the price of goods rise and fall, cashing in on deals when the market is hot. Other, more blood-thirsty players ignore the market, choosing instead to spend their time traveling the system's space lanes, searching for vulnerable ships (both NPC and other players!) to attack and pillage goods from.

Still other players, uninterested in watching the economy's patterns or committing themselves to a life of piracy, travel to every corner of the solar system, scanning the empty void of space in search of abandoned or derelict cargo. And if that wasn't enough variety of play, some players abandon the economy altogether, instead spending their time hacking other ships and facilities, trading intelligence on the black market for experience and gear.

The subtle genius of Gemini Station is that while everyone is trying to make money, level up, and acquire gear, there are so many different ways to accomplish those goals that the game feels anything but linear. A player could exclusively trade, fight, salvage, or hack and still have a completely full and satisfying game experience.

But to get the most out of your style (or styles) of play, you'll want to choose the right ship. There are three classes of ships, each with three upgradeable levels.

Each ship class lends itself towards a general function:

Each ship has its own class bonus. For example, freighters can carry more cargo and have a higher defense than fighters or scouts. Scouts are much faster, making them more difficult to target, while fighters deal more damage and are more adept at targeting enemies.

There's a ton of overlap between classes too, so don't think that just because you choose a fighter you've resigned yourself to a life of nothing but combat. In fact, some of the most successful players are ones who have managed to leverage their ship's abilities with their desired play style using corresponding gear. Which brings us to ship modifications.

This is where Gemini Station truly shines. In short, Ship Modifications, or Mods, are the gear used to upgrade and fully customize your ship's abilities. Mods, combined with your ship's class, gives you a near infinite number of combinations. This level of customization allows players to fine-tune their ship to perfectly match their desired play style. And with thousands of mods to buy, craft, steal, or find, every player's mod loadout can be as unique as they are.

But Gemini Station isn't a soulless grinder. It's complete with a rich, immersive story that helps drive the player through every level of the game. Additionally, there are countless side missions available from every major location that when completed, award players with everything from unique mods to faction rep, to xp and money.

The beauty of Gemini Station is that it seems to have something for everyone. Casual players can set course for remote destinations like Mercury or Eris, then come back to the game to conduct trade after they've arrived. Fully engaged players can make the five-minute trip from Gemini Station to Mars or Earth to trade and spend their short travel time attacking, scanning, or hacking.

The game is new. They've just completed nine months of open beta testing with a community of over 500 registered players. They officially launched v.1.0 in January of 2020. So now is the perfect time to get on board.

A vibrant, growing community coupled with outstanding design, dynamic gameplay, and immersive storytelling has positioned Gemini Station to be a major contender in the browser-based game industry for years to come.

See for yourself, you won't be disappointed.

4 comments on “Gemini Station - A text-based game in disguise”

Started playing just a couple days ago! The game looks great and has a lot of potential, and the developer is active in talking to the community on forums and Discord. Still a little on the barebones side, as the developer is still working on fleshing out the mechanics. Grinding cash to get upgrades seems slow in the early game--hoping to break the plateau I seem to have hit around level 7 and get to speed up or beef up my ship. The first section of the plot is fun and moves quickly, but the second chapter has a section that is extremely long and repetitive, so I feel I've stalled a bit. Will push through though!

Community is friendly and active, and there seems to be a lot of fun later-game upgrades in store.

Good game. I participated in the beta 1 month in November, and now I am present from January 1. Game just born, over time will have to adjust. Programmer (unique) present on discord to talk about the game, bugs and changes. Single server, to level (level cap at 60 at the moment) will take a long time