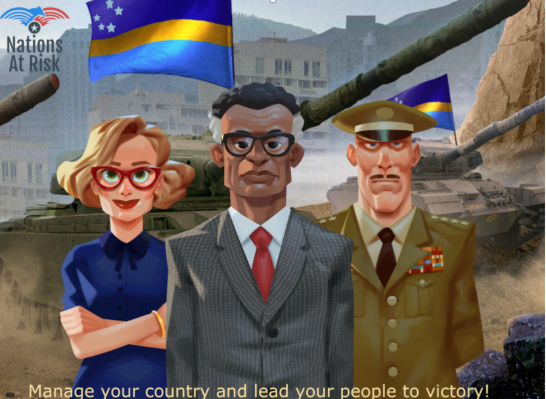 Furthermore, the developers continue to roll out regular updates to make it bigger, better, and more intuitive. The most recent update and quite an extensive one came out on May 17, 2021. However, let us do a quick review of some of the legacy features first.

The Legacy Features on Nations at Risk

First of all, it is a free of cost, slow-paced, browser-based, war-strategy/nation-simulation game; you get to enjoy full-scale multiplayer gameplay.

You will be solely responsible for creating a country of your own and select your government officials. Furthermore, there are features that allow you to build and level up several structures while recruiting an army to attack and conquer your enemies.

You can mould the national politics and how your national parliament operates. Plus, you have to maintain an international reputation in a Planetary Union Organization. You can join an existing alliance or create your own when you sign up for Nations at Risk.

Collaborate with other online players and decide the pathway of war and politics together.

What Make Nations at Risk So Different

If you wonder what makes Nations at Risk a better choice than other alternatives out there, here are some that will be enough to convince you:

The Recent Updates in May 2021

The developers of Nations at Risk rolled out the most awaited update on May 17, 2021. Here is a quick summary of what additions and enhancements came in the package.

The new updates allow military buildings to enlarge the maximum number of units of similar type. Therefore, now your boot camp and barracks will be able to increase the maximum capacity of all infantry units.

You can later decide if you want to recruit these soldiers in defensive or offensive units. For instance, you have a maximum capacity of 2000. Now it is your call to decide what combination you wish to recruit them in all units, such as 900 in offensive and 1100 in defensive, etc.

There are several bonuses you can earn and up your level in the game. For instance, you will get a diversity bonus if you combine any type of infantry and mechanized units to attack or defend. You will get a 20% increase in your military power for the entire army. For example, you use light tanks and infantry units to fight against a light tank unit of the enemy. In this scenario, your military power will increase by 20% during the attack. So you have a longer lifeline than your opponent. Hence this increases your chances to win.

Here are some bonuses that the update applies when you use a specific combination of units:

Now you can organize your units in 3 different states, which are:

The new update has now significantly reduced the number of lost troops after each level.

Plus, if you wish to help an ally, you can only use reserves to send military aid units. These units again end up in the reserves once you have sent them.

The resource aid that an alliance can send to its members is now three mills of each resource per day. Furthermore, all units received new stats, whereas the update has reduced the building level per-requisites for units.

Whether you are a novice who has just started exploring the online war-strategy & nation-simulation gaming arena, or a fan of such games, you owe it to your inside gamer to try this addictive war simulation. So sign up for Free and play Nations at Risk.