Could an RPG Be the Next Big eSport? 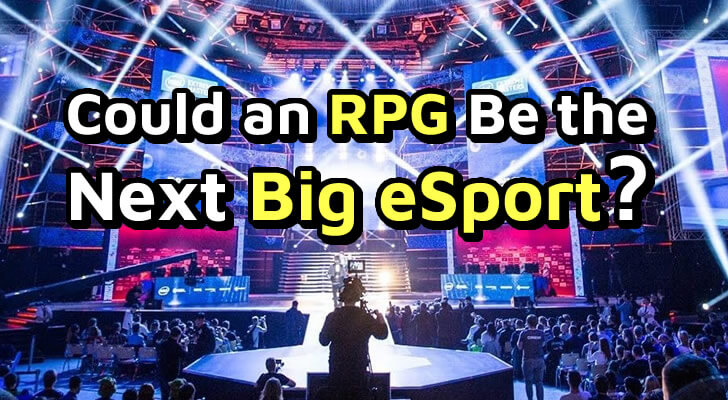 Competitive gaming (eSports) is experiencing explosive growth at the moment. A data chart from industry analysis firm Statista reveals that eSports is expected to have a global market revenue of $1.650 billion by the year 2021. This is more than double the market revenue of 2017 ($655 million).

However, so far, only some game genres have been able to benefit from the interest in competitive gaming. Sports games and shooters have succeeded greatly but role-playing games (RPGs) have been left in the dust. But could an RPG be the next big eSport?

What Are the Most Popular Esports Game Genres?

Shooter games (including first and third-person shooters) are some of the most popular titles around, and that includes in eSports. Some massive examples include Blizzard Entertainment's multiplayer shooter Overwatch, which has its own competition (Overwatch League) and military shooter franchise Call of Duty, which has its Call of Duty World League Championship. Shooter-based battle royale games like PlayerUnknown's Battlegrounds and Fortnite have also become major eSports players recently, with Fortnite studio Epic Games hosting seasonal competitive tournaments.

Sports games have also proven to be a hit as those who don't have the athletic prowess required to succeed at a sport in real-life have been able to excel in the virtual version. NBA simulation series NBA 2K now has its NBA 2K League, while the FIFA eWorld Cup lets people score on the world's greatest players without moving more than their thumb muscles. And then there's the MOBA (multiplayer online battle arena) genre which includes games like Riot Games' League of Legends and Valve's Dota 2.

All of these games include some sort of RPG element. All of the characters (and players, in NBA and FIFA's case) have skills and stats that determine their abilities and their roles within a team and, like in RPGs, players must think strategically to win. But they aren't what we consider "true" RPGs.

Making RPGs for an eSports audience could be tricky because they are often known for their size and scope. Forbes reveals that The Witcher 3: Wild Hunt has more than 200 hours of content, while Bethesda fantasy RPG The Elder Scrolls V: Skyrim can take over 1,000 hours to complete when considering bonus content and all playstyles. But, on a micro level, RPGs have many of the same elements that make other successful eSports games so compelling.

One factor in this is that they encourage players to work together. While many RPGs (Skyrim and The Witcher 3 included) feature companions that are controlled by AI, in eSports, it's often real-life players who have to coordinate their attempts. Looking at the eSports games that you bet on with Betway, all of the leading games that people love to place bets on are games like League of Legends, Dota 2, Rainbow Six Siege, Overwatch, and Call of Duty. What makes these games so entertaining to watch - and why people place bets on them - is because they love watching how teams are (or aren't) able to work together and how impressive strategies that require multiple players can be pulled off. If RPG developers are able to design better AI and personalities for NPCs, there's no limit to what RPG eSports players could be capable of.

There's also the fact that RPGs feature character and weapons builds, which is a key part of games like League of Legends and Dota 2. This Rift Herald Sylas champion guide tells you how to play a popular League of Legends character and what items he works well with. It's just one of the thousands of guides like it and players of multiplayer games like League love iterating and improving. That's the same with RPGs and it's why RPGs are considered so replayable.

Which RPGs Would Be Good eSports?

Any RPG that becomes an eSports needs to be accessible and have a winning metric. On the accessibility front, strategy browser games that can be played by anyone with an internet browser and an online connection could potentially be a breakout.

Since there aren't necessarily any towers to defeat or goals to score (in most RPGs), developers would have to get more creative with the victory conditions. In the case of the music industry RPG Popmundo, could the winner be the first player to hit the big time? And, in romance game My Candy Love, could the winner be the first person to go on a date with their crush?

If eSports is to expand and double, if not triple that $1.6 billion market revenue, then it will need to embrace more game genres. RPG is one such genre that would make a good fit for competitive gaming but it remains to be seen if the industry will consider it soon.

1 comments on “Could an RPG Be the Next Big eSport?”

Interesting approach. RPG indeed could make it to eSports. Imagine DUNGEONS and RAIDS with goals to achieve to determine the winner. I like this idea, please devs MAKE IT HAPPEN!