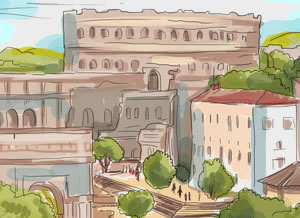 Next age will be Rome again. It wasn't planned, but Rome ages end fast so they've decided to have one more Rome age. Later there will be Europe-, Asia- and again Rome age. When this happens, the total amount of ages reach 200! Some small changes, some units tweaking and hero weapons adjustments as well as decreasing garrisons. For testing purposes, they will also price up apprentice soldiers.

The Last Knights has been with us for a long time now and has grabbed a lot of players within that time. When they first started out, they managed to quickly get 5k players, at that point everyone knew that this game was going to last. Game started in 2005 and has steadily been with us for ten years now and there is no shutting down anytime soon. The community has helped a lot, could even say that did most of the promo for the game. For this wonderful anniversary they've planned to add a 3rd map set in early Roman Empire age. You can now choose between Carthaginians, Romans, Greeks, Carthaginians, Persians, Greeks, Huns etc. Happy on-going gaming, if you are a new user, make sure you try it out below.