In Politics & War you get to create and build your own nation. Customize every aspect of your country including your nationâ€™s flag, leader, borders, policies, currency, and much more.

Manage your resources and economy, mining raw resources and refining them into manufacturing resources to build city improvements, national projects, military units, and more. Enjoy a completely laissez-faire player driven market where all prices are driven by real player supply and demand.

Build armies and wage war against your friends or thousands of other players. With 7 different unit types to choose from, including nuclear weapons, you can raid neighboring nations to loot money and resources or fight to wipe your political opponents off the map.

Engage in diplomacy. Join or form an alliance, completely player driven political entities in the game. Team up with allied nations to extend your influence over the game. Compete for power and control in all aspects: economic, military, and political.

Politics & War is 100% free to play with no downloads. The game was created by a high school student in 2015 and that admin is still active and updating the game today. Politics and War has a unique and engaging community. If you like politics, nation-building and roleplay, you will love Politics & War! 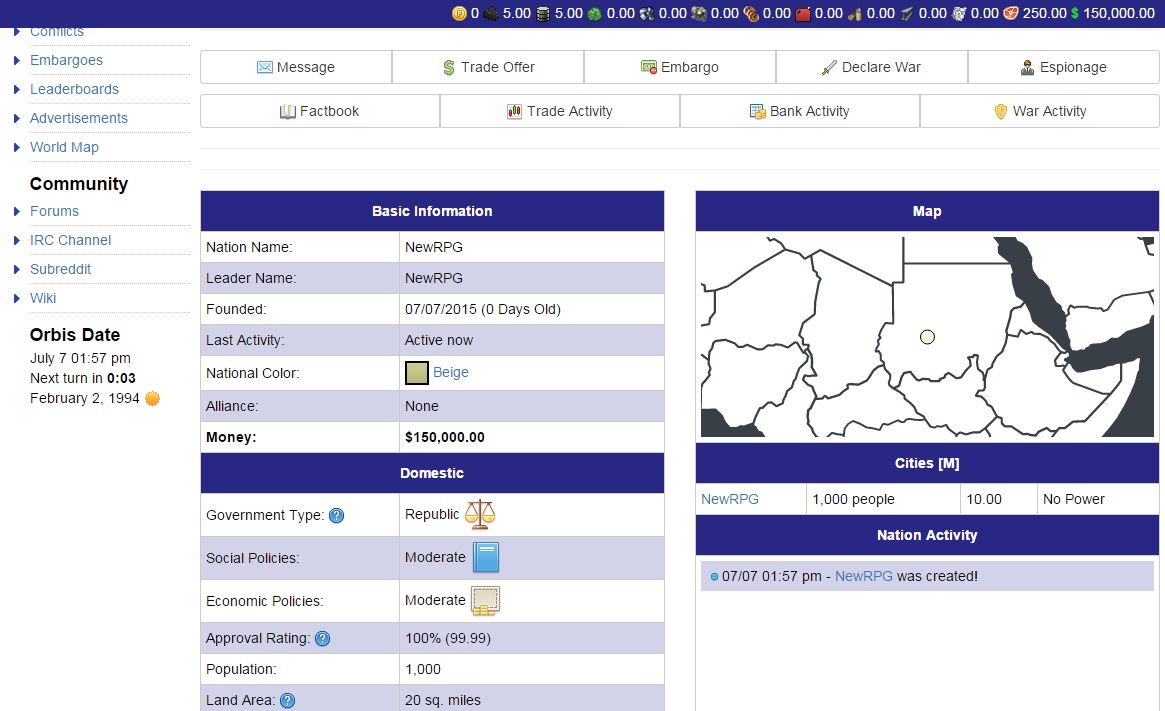 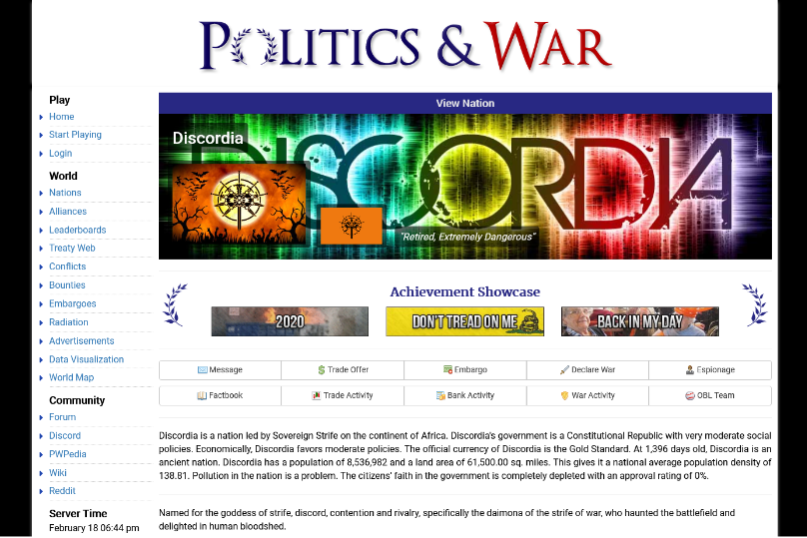 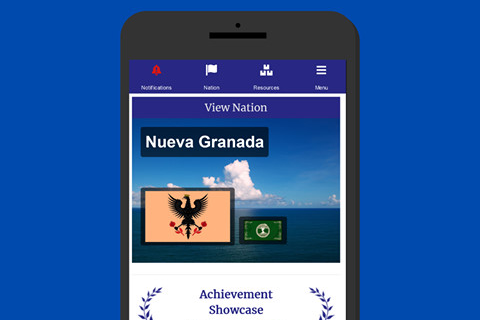 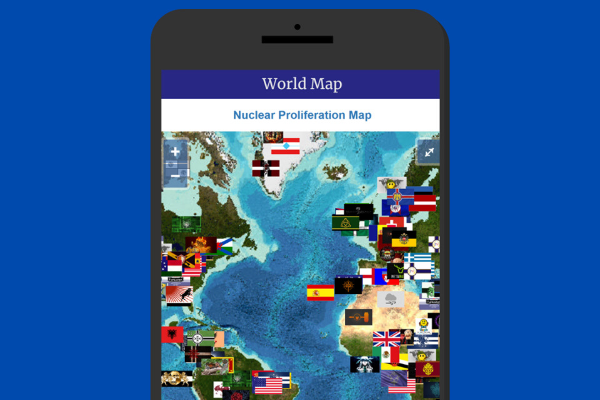 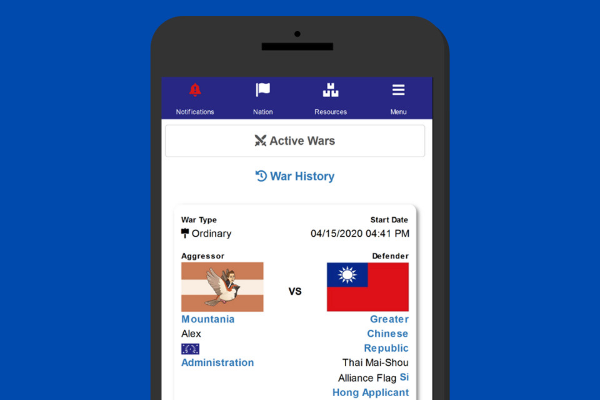 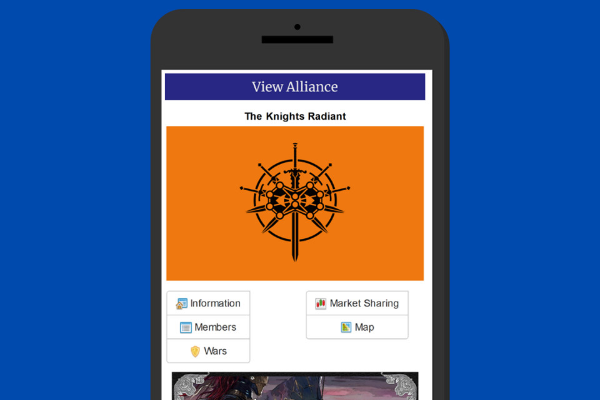 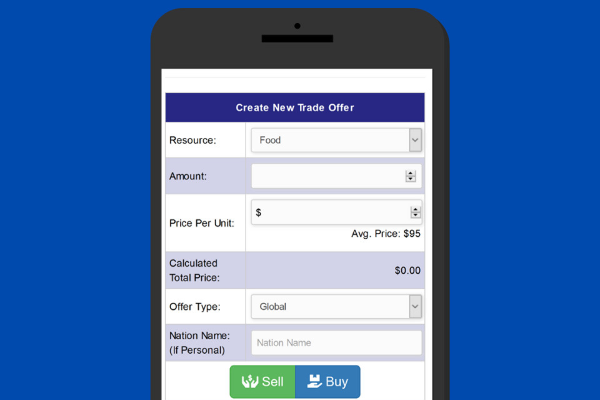 This game is awful. Expect to be heavily taxed to join an alliance or to get attacked literally 20 times a day by the same players even when they get 0 gain from attacking you. Its obvious the players are excessively board.

I NEVER get attacked
I attack them

Badass faak meh.. I bet you get all the b1tches too..

the game is really awesome it makes me fill like a leader and shows me how a nation is being ruled.

Join Rose, we're the best alliance in the game, we are good at wars and have 0% tax yet give out funding for every city and all projects.

Hello guys, I am Nao the guy who is the best player in this game. If you play this game, I can assure you that you will not end up infected by any Abbas, just the ones which are made by the obnoxious Uranicas Socialitas and Green Protection Agency alliances. I highly suspect that both of these Shellhounds are simply just running multies on an unprecedented scale however I am having issues tracking them down. Would anyone like to hmu on kik on how to get rid of these guys so that my game can be just like Bloc and more like saetonn?

This game is a rip-off. Just been asked to pay 2 credits ($9.75) so I can display the English national flag on my nation page. For some reason the owner of this site doesn't recognise England as a nation yet I could have the Welsh and Scottish flag for free?

I've been playing this game for a little over 400 days. In that time I have served in 3 major wars, served 3 terms in government, and have even become vice-leader in an alliance of over 100 members. This game has a real knack for serving players of all kinds. Those like me, who have nothing better to do, and those who have lives and merely wish to be the occasional roleplayer.

I am the great Caliph Abbasmehdi, leader of the Islamic State Of Orbis. We at ISIS have come to Orbis and have created the great alliance Uranicus Socialitas, anybody who does not join shall be beheaded, as Islam is a religion of peace.

For Ramadan, we fast. Instead of eating we use the time to play PW and convert people to Islam, Allah is the truth, ISIS is great!

isis are not muslims...isis are made from USA...so shut up

Hello guys, I am Nao the guy who is the best player in this game. If you play this game, I can assure you that you will not end up infected by any Abbas, just the ones which are made by the obnoxious Uranicas Socialitas and Green Protection Agency alliances. I highly suspect that both of these Shellhounds are simply just running multies on an unprecedented scale however I am having issues tracking them down. Would anyone like to hmu on kik on how to get rid of these guys so that my game can be just like Bloc and more like saeton?

Hello. I am Grealind, I am a player of this game and I am buying the game from Sheepy in the near future. I hope to bring new life to the game once I do and fix all the exploits and ban those awful exploiters.

I've had large amount of experance as an admin, when I ran a game of the same type, I saw new life there and it became greater then ever before. I hope to bring that glory here and make PW the best game on Earth, with Grealind as admin, we can do it!

I am a great leader and I've even run an alliance here and become within the top 20 in the world. Quite impressive ain't it? I'm sure my leadership talents will carry over and PW will become one great game under.

I've also been playing these games for a long time, which means I know exactly what the players want. It should do well under me.

Currently there are players who have the ability to spawn money and other things out of thin air. This game is broken and should not be played until it is fixed.

Sorry for everyone who wanted to post nice things, but this is the truth. Until the cheaters are discovered, the exploit fixed, and everything put back to normal, DO NOT waste your time on this game.

This has long since been resolved, and this review is extremely outdated. The game is very secure, and has been for several months now.

I'm also using my in-game name :D. Politics and War is honestly a fantastic game, and it's an absolute blast to play. Not only can you build your own nation, but the politics between alliances and nations are truly dynamic and interesting, and there are a whole lot of great communities in P&amp;W.

Using my PW name here. Politics and war is a great game that allows you to make a nation and manage its resources and economy by building your nation's infra which will increase the population and land that is needed to produce food for your citizen's. The more infra you get the more improvements you can buy ( you get 1 improvement slot per 50 infra) which can go from raw resource improvs such as coal and iron to improvs that cam refine your raw resources into steel and ammunition. You can also join alliances filled with veteran players who can help you buold your nation and teach you how to play and give you a chance to join a good community. Every alliance is different with their own set of guides and way of playing. So join pw now and join in on the fun.