Shadowmere Tales is a fantasy themed kingdom management, magic and war game. Play solo or join an alliance of other players. A crazy amount of rules and content to learn makes it difficult for new players, but also exceptionally rewarding if you stick with it. Aimed at the thoughtful gamer who likes a challenge as opposed to being spoon-fed. Very limited graphics. Entirely free to play. As at July 2015 in permanent Beta. Players are invited to suggest and discuss the game development, which is continuous. Game has a long history of prior versions dating back to the late 90s, past players may recognize it as just Shadowmere or loosely, as Forgotten Worlds. 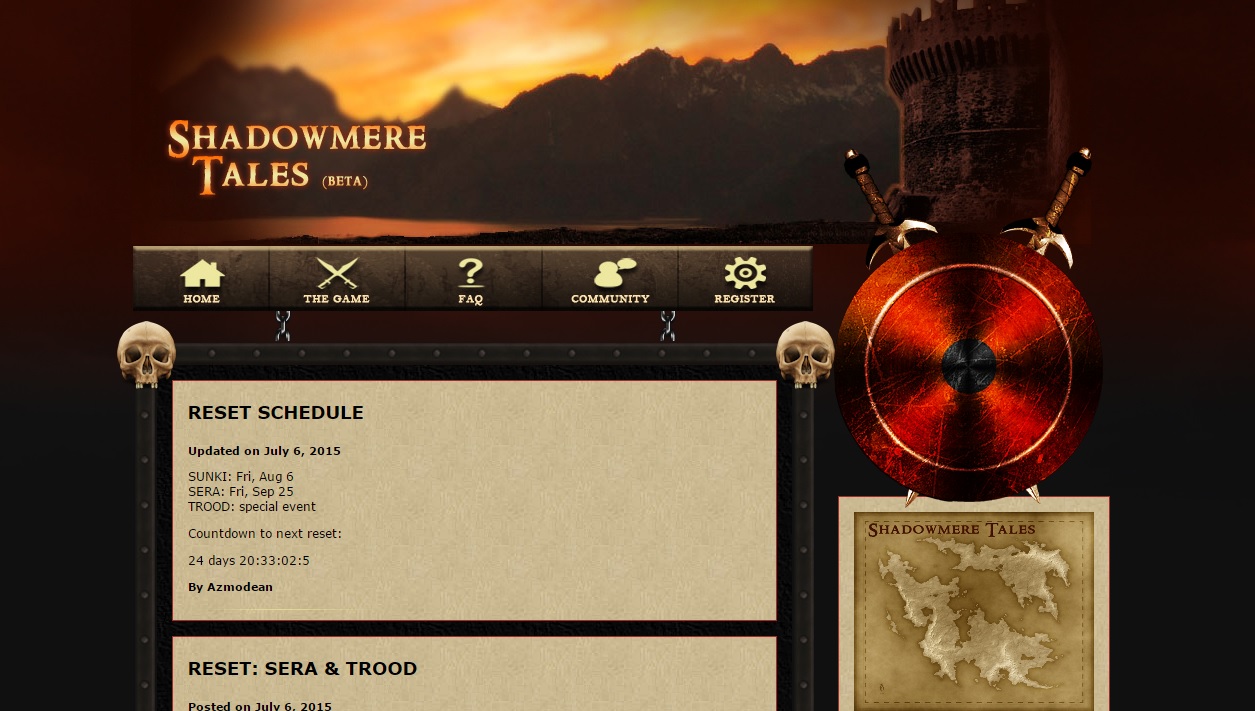 Where can I play this game?

Been playing this since 2008 still love it. 5 stars

Secondly: This is a war game. This does not mean you have to attack others but eventually, if you are to become a game expert, you will have to defend your kingdom by returning attacks to others.

3rd: This game also requires you to successfully run a new kingdom. 'New' means you need to improve it by exploring for land, building upon that land, doing some studies, and hiring troops to defend at level 1 and above. Note that unlike other text games we do not get into 'silly' details such as going out to buy lumber, etc for buildings; you just need open lands and laborers. You also don't need to buy or create daggers, swords, troop sandals, etc. In this game it is simple: weapons, armor, and war machines (think catapults). This game is already complex as is to make it enjoyable for all.

The biggest perk of this game is that you don't have to pay a dime for it! Its 100% free, There are no advantages to donating at all! If you aren't high in the rankings its your fault, and you'll grow higher as you learn the game. No one gets bonus turns from donating, no one gets and advantage for donating whatsoever. If your tire of those Pay to Win or Freemium style games then this games for you!

I have only recently found my way back to the game I have spent hours per day with about ten years ago - and it has lost nothing of its attraction.

If you are looking for shiny graphics, easily understandable rules and quick results, keep away. Because that is what makes games boring after a very short period of gameplay. But if you are looking for a challenging game that constantly keeps your brain on its toes (a strange picture is forming in my mind...), have a look. The players are helpful, and the first steps are explained quite well.

A very challenging game with 18 different races to choose from, spells galore, and 6 different ways to attack others. It also gives you a nice handicap if you are a new player. You can choose a quickly advancing friendly race (such as wood elves or minotaurs), or a nasty attacking race such as goblins or ogres, or something in between such as gnolls . However be warned of the difficult races to play such as werewolves, vampires, sprites. Those races, unless played by a expert players, will be stuck down below in score.

This game has several continents to play in (Sunki, Sera, Trood, etc) and they reset every month or so to start fresh once again.

Simple expert help is to 1. Play a easy race that can easily recover from attacks to it. 2. Wait until you have 200 turns to start your kingdom (usually the next day; each of the continents' kingdoms collect turns at different rates. 3. Check the games' wiki to see your races' strengths (some are mega fast builders while others explore really well). 4. Increase your gold per turn by building coliseums and market places. 5. Hire more laborers to build faster, and hire troops to defend your kingdom from attacks. And 6. Eventually study economics, construction skill, spell realms, and maybe weapons and armor skills. Remember!! : Enemies can take your land but usually cannot take your studies away. More studies = better ability to advance and/or recover. you need LESS turns to advance because of higher studies. OK, have fun!

one of those great classic game that creep on you and stay in your sweet spot.
Great community and support, easy to learn and by far 100x better than any fb app game. I highly enjoyed it and recommend anyone who's interested in a tick base kingdom building and warfare.

I must confess that I am a long-term player of this game - which in itself must say something! I am a very ancient gamer, so I can thoroughly appreciate this primarily text-based game as I do not require flashy visuals for my entertainment.

As in the description, this game is very complex, and takes time to learn (and ages to master!), but there is always help available (wiki or other players (well, most of them ;)! )).

The game has been around a long time (and should, honestly, have perished with the advent of flashy visual browser games), but it has survived the highs and lows because there is just something about it which draws you back again!

Just try it and experience something different which repays commitment (rather than just instant gratification) - make yourself known on General Mail and someone will point you in the right direction or take you under their wing. :)