Play The Kingdom of Loathing

The Kingdom of Loathing images 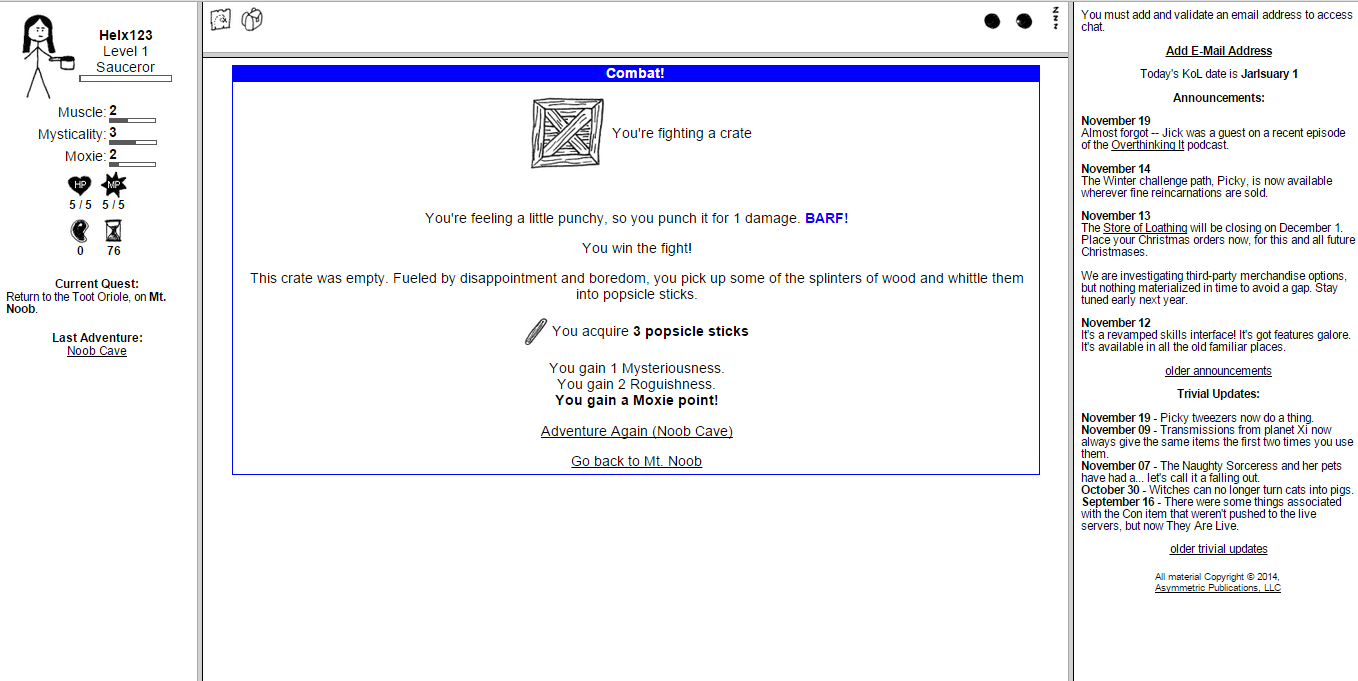 8 comments on “The Kingdom of Loathing”

I've never played a game with as much replay value, ever, in any context. It's constantly being updated and improved with new things to discover. Possibly also the only game that does extra paid content right--it is unequivocally NOT pay-to-win. It's held my interest for nearly a decade, has an incredibly committed fanbase which forms a great, helpful community, and still makes me smile. Five perfect stars.

Kingdom of Loathing is filled with off the wall tongue-firmly-in-cheek humor and the warmest friendliest most-helpful caring sharing players you could ever hope to meet. It may seem daunting and confusing at first, but I promise that if you stay with it and make friends with fellow players, you too will find yourself looking forward to each day's turns. There is a friendly PvP arena, but for the most part you just fill quests and explore and fight NPCs with the most ROFLMAO written descriptions ever. The KoL Wikipedia is the most extensive and detailed you will find in any game anywhere, written and constantly added to and revised by players for players, with baby steps for how to do everything! I've been on KoL for over 5 years. Unlike most players, I have never "ascended" and become any other class, yet there's so much content and so many areas to explore that I'm never bored or at a loss for things to do , with new areas and events added at just the right frequency. Again, the key is to join, meet fellow players, read the Wiki whenever you aren't sure what to do next (I practically set up a cot and a mailbox in the Wiki for the first several months I played), don't be afraid to ask questions or ask for help.

This is the only game that has held my interest for a WHOLE DECADE; that's right I've played this game for over 10 years.

It is a fun and free game based around pop culture references and stick figures. The game is amazingly deep and constantly evolving. It has many different events, holiday and otherwise, and it even has a month long holiday event every December that changes each year.

Each time you play it is a little different (and sometimes a lot different based on challenge paths).

Check it out and you won't be disappointed.

I've been playing off and on since 2005. I can only think of only a handful games that I've played over a longer period of time, and none of them I've come back to as often (well, except maybe Master of Orion 2).

It's almost always funny, the references go from in-your-face obvious to obscure enough that you're not sure they're there, and the basic 'game' of ascending is almost always enough to get you to come back tomorrow for "just one more thing".

I started playing this game back in 2006. It's great to be able to take breaks yet still progress with a character in a game that's been built upon for almost a decade. The amount of "stuff" I still want to do will take me a couple years so you can only imagine the possibility for new players coming in. Not to mention new content on a monthly basis along with minor "fixes" on almost a daily basis.

One of the best (online) games ever with one of the most active and helpful forum communities I've ever played. Very friendly devs who actually listen to the playerbase!

Kingdom of Loathing is, on the surface, a humorous turn based RPG. The setup seems simple initially, with six different classes to choose from. Each class is a parody of the standard RPG classes and range from Seal Clubbers through to Disco Bandits. From this point on it's clear that humour is a large driving force, as the game is filled with numerous jokes, pop culture references and other forms of hilarity. At first the goal of the game is to complete all the quests given to you by the Council of Loathing, leading to an eventual showdown with the final boss, the Naughty Sorceress. Once you've managed that, the game gives you the option to ascend and start over again as a different class, in the process also allowing you to permanently learn skills from the class you just played as, allowing you to strengthen your character over multiple ascensions.

One of the most important aspects of the game is adventure management. You get given 40 adventures per day, which gets incremented at a set time each day. You can increase your number of adventures by eating food or drinking booze with different qualities giving more adventures. Combined with the ability to improve your character over multiple ascensions, there's motivation to learn how to complete each ascension faster than the previous one. Learning the shortcuts to most of the quests is a good driving force to constantly improve.

One of the largest reasons to keep coming back is the constant addition of new content. Every 3 months a new challenge path is released (which allows you to play through the game with a set of restrictions, or often a completely different class to the standard 6) Every December features a massive Crimbo event that builds up stories from previous years. Among things like clan dungeons, a few high level post-game areas, constant challenge paths and occasional world events, it'll take a long, long time to explore all the content available.

This is an amazing game! It's full of pop culture references, with an intricate puzzle and adventure layered together. You get to choose a character class and a familiar. There are many familiars in the game, and each can help you in a variety of different ways. As you progress through the game, you can change character classes, unlock new explorable areas, and gain skills. The game is turn-based, where you get so man turns (adventures) per day, making items such as booze and food which grant you extra adventures very valuable. There are many modes of difficulty and you are rewarded for completing various difficult challenge paths.