War of Republics is a browser game, in the same style as eRepublik. You take part in a global simulation in which the economy, war and strategy intervene.

The game's economy is very diverse. You can collect resources, produce objects, carry out research in order to improve your objects, transport goods, produce electricity for industry. You can start companies and invite other players and countries to invest in them.

By taking part in the national elections, you can become president of your country. As president you will be able to choose the list of the ministers who will take part in your national government, you will be able to define what will be the economic policy, e.g.. taxes, what will be the policy budgetary choices, etc. For example you can set the budget allocated to your armies or to regional infrastructures (such as cities, universities, and military bases). Your proposals will be submitted to the national congress.

Maintain good relations with other countries, choose your allies and go to war against your enemies.

Enlist in the army and protect your country on land and at sea. Access to resources and trade routes is crucial and often the cause of war. Challenge your opponents and engage on the battlefield with your tanks, missile launchers and more. 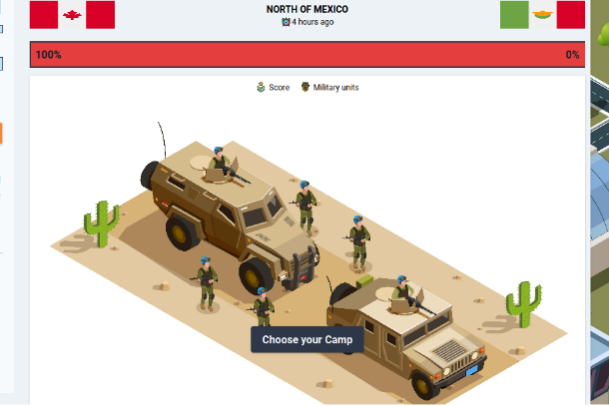 1 comments on “War of Republics”

it is very different game style than erepublik