How to Make Money Playing Games on the Blockchain 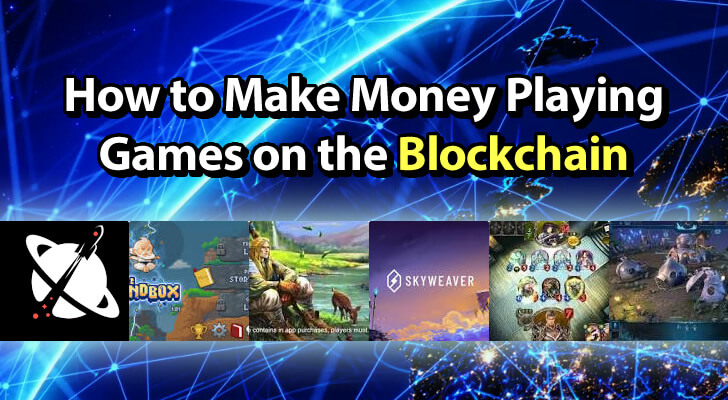 Blockchain has been gaining favour over the years. This is because the technology is accommodating to near enough any industry. In fact, long gone are the days when blockchain was only connected to cryptocurrencies. Although some may argue it is mainly down to Bitcoin being such a success and being easily accessible via bitcoin wallets from Luno as well as other trusted companies, which has encouraged businesses to embrace blockchain technology.

The Gaming Industry has been quick to take advantage of the benefits of blockchain. Gaming has always been the most popular choice to spend your free time. The problem is, it's difficult to earn serious money with it unless you are a professional gamer or a streamer. Luckily you don't have to be neither of those and still bank up some serious cash. The magical combination is games and blockchain!

This wonderful merge has gotten quite popular and in fact is at its very peak at this moment. Instead of pay to win, we will now be seeing the rise of play to win. Everyone loves games and everyone loves wealth, so having those two as one is absolutely insane.

How does this work out for both players and developers?

Well, blockchain games are all about tokens. To simplify, just think of tokens as currency, just like EUR (Ç) for example. Their value is mostly the same, which means you can create yourself a stable income with ease. Let's take a look at a specific game to give you a better overview of how all this works, Etheremon - one of the first games and also one of the most popular games of this type.

Game mechanic itself is rather simple, you can capture Mons (creatures), train them and evolve them as well as trade them with other players in the game. When you start playing it, you are rewarded with some free Mons so you are instantly in the blockchaining ecosystem. You can basically earn money two ways - mine EMONT tokens or train your mons and sell them for other players (or combine both). And as mentioned, the gamers and the value of tokens create an ecosystem. This means that the more players there are and the more players use EMONTs - the higher the token value is.

Just like bitcoin, if you miss this train when they are cheap - you will regret. Just get into blockchain gaming, earn some tokens just in case. What's the worst that can happen? You earn nothing, but had tons of fun playing the game itself - even that doesn't sound too bad.

Keep in mind that there are tons of blockchain games out there. Don't just pick one that is popular, pick a game that is fun to play because that is very idea of combing these 2 aspects. You will spend a lot of time in that game, might as well invest some time into picking the most suitable game for you. In case you are afraid of getting into all this because you lack the knowledge of blockchain - then don't let that stop you.

First of all, you can gather the tokens for a year if you want, you do not need to withdraw them instantly. You will learn about the blockchain along the way of playing the game. Second of all, with the free available resources we have thanks to Wikipedia and YouTube and what not, we can learn all the crypto stuff within days or even hours. The point is, don't be afraid of getting into it, you got nothing to lose and if it all works out - you'll have a stable enjoyable income.
Sharing is caring