Hi, I'm Adam, and I'm an alcoholic. No, wait, the other one! I'm indie game developer - that's it :) Back in 1990s I used to review games for Polish magazine called Amiga Computer Studio and I was constantly irritating people by pointing out all the mistakes made in the games that I was reviewing. At some point I said to myself what most of the indie game devs have said: "they all are doing it wrong, I'm the only one that can make it right". And I kind of did - together with my brother we made PSV Manager for Amiga, it was football manager game that described most of the events using audio samples from known movies (for which right now we most likely would be crucified by copyright nazis). Taking under consideration that back then I had virtually no programming skills and was using an outdated tool called AMOS Basic (that was used mostly for platform games), it did not turn out that bad (and yes, I'm fishing for compliments here). It was popular in Poland, and an English version was made in about 2000, but we did not have enough audio material to make it as good as the Polish version.

While I was working on the final touches for PSV Manager, I made a silly little game called Santa Monica FC for Amiga that I made in 48 hours. It was a very simple football manager, just a quickie on the side while the grind of making the bigger game became too intense. Around 2001, when I was learning to program in PHP, I started an online multiplayer football manager called Football-o-Rama that was active until 2010 when about 2,000 people were actively playing it. But unfortunately I had to rework the game and did not have enough time due to my work obligations. So since then Football-o-Rama is on hiatus. Where is Caroline? was one of the side projects that I made in early 2000. Now, while I work on an improved version of Football-o-Rama, I made the Santa Monica FC Online, again as a side project to deal with the grind of Football-o-Rama (that is about to be made public in December 2020) and test some solutions for the bigger game.

Is there a team around you?

No, I work alone. I had some help with the Amiga projects, but with time, as most dictators, I just had to do everything the way I like it. Besides most of my games are zero-budget projects, so there is not much space for outside input. Yes, I'm the Ed Wood of online games :) But seriously I think I would actually miss the grind if I paid someone to make part of the game - even if the game is not great at least I can say "I made that", not "I know someone who made it".

The Santa Monica FC Online was a game that I planned to make for few years, because I could not find a decent online football manager. I mean I could, but the problem was I did not enjoy most of them or there wasn't much to do - you'd spend 5 minutes on setting up your team for the next round and... you had to wait 5 or 7 days for the result. That's why SMFCO was supposed to be something that is missing in online games of the genre. It's a single player football manager online, compact and simple so you could play a full season in less than 30 minutes. 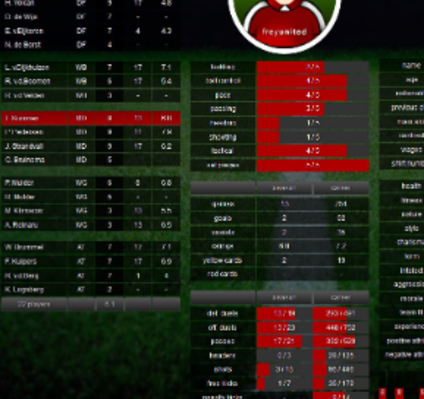 Another problem was that I had far too many concepts to fit into one game - very simple gameplay looked attractive, RPG approach was looking promising, but simulating competitions from different times also looked good. And that's why SMFCO has different game modes to choose from. You can play in very simplified mode called Classic Casual, where you don't have to worry about most of the things apart from choosing lineup (like in the original Santa Monica FC on Amiga). You can add some depth to the gameplay and play Modern Casual or go for the real thing and play SMFC Pro, where you deal with more details of your club. You can also choose Retro Casual, where the gameplay is set in the year 1982 (with pixelart graphics), and there is national team manager mode (called Niklas Persson's Project). There are few more game modes under development, including one RPG oriented.

SMFCO also has over 180 countries to choose from, several starting budget levels, 4 difficulty levels, so together there are hundreds of thousands of combinations in which you can start your game and each time the game will be different - all opponents are procedurally generated for each user, so you won't have two exactly the same games. There is an editor that allows you to change all the teams and player names, some of the player characteristics are hidden from you before they spend some time in your club, so SMFCO is a bit of a journey.

How about Where is Caroline ?

Where is Caroline? is a mixture of a travel game, a point-and-click adventure and an interactive novel. I made it back in 2001 for the fans of the Caroline in the City sitcom and it was published back then on their fans website. Last year I found it in a dark corner of my server, was surprised that actually it is still a fun game to play, so I rebuilt it to meet modern standards.

Although the gameplay was built around Caroline in the City characters, you don't have to know much about the series (all you need to know you can learn from reading a one page summary on the game website). The plot of the game is rather simple - one day you woke up and realized that you are in love with Caroline Duffy and simply can't see any way to live without her any longer. The problem is she is about to get married in about 2 weeks, so you don't have much time, especially since those 2 weeks are rather busy in her life.

You travel throughout the United States (and other places) using any form of transportation available and gather information on where Caroline is right now, or rather where the character you talk to thinks she is. The data you are given could be wrong or could be outdated. The goal is to find Caroline before her wedding and literally be in the right place and right time to find her since she is constantly on the move. 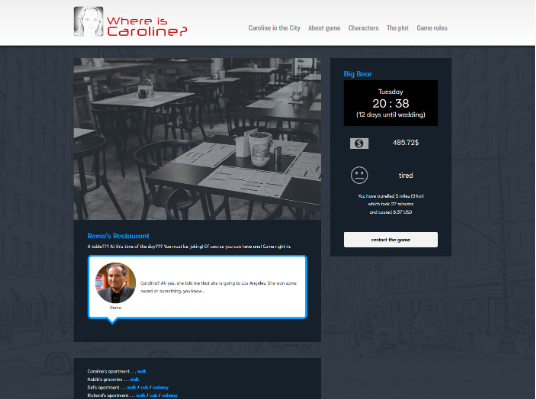 As it turns out it is a bit similar, although I've never played Where is Carmen Sandiego?. My game was inspired by an old Atari game called Agent USA, in which somewhere in the United Stated there is a "bomb" that infects people and while traveling only via trains you had to find and destroy it. It was a fun arcade game, but the trick was that every 12 to 24 hours the bomb was relocating randomly to another city that was linked by railway to previous location, so if you did not make it in time you had to guess where it moved or find info about the current location.

In Where is Caroline? I tweaked the concept slightly - your target is constantly on the move, but the moves are not random, so if you manage to correctly predict the next moves you can find Caroline quicker. Also I added a few factors, like you need money to use planes, taxis or trains and can only take $500 from an ATM machine, so if you run out of money you need to walk until you can find another ATM. Another factor is that you get tired - from time to time you need to sleep, whether you like it or not.

Any more plans for games?

Actually they are just the two games that I made, there are a few even more different games underway, like Lone Detective (detective game with different game modes, right now in alpha status), Small Devil Inside (Formula One-like manager game), Zone Red One (point-and-click adventure set in S.T.A.L.K.E.R.-like reality), Nation Leader (political game).

Is there a big difference in the player-type attracted?

Oh yes, Where is Caroline? had a very small, niche audience - fans of a sitcom. And for them, just like for me, it was just a bit of fun - they had rather casual approach to the game. With Santa Monica FC Online the range of people that play it is far wider (geographically and age), so their approach vary between people. In general they are far more target focused, often I see them start new season, after few poor results they just drop the game and start a new one instead of working harder to improve their team.

But the most bizarre, at least for me, is that a lot of SMFCO players have a Dark Souls-like approach: they choose the hardest difficulty level called misery (and it is called misery for a reason), they fail rather early in the season and some of them will not try any lower difficulty level. They take misery, after few matches they are miserable, so they just quit. It's like the challenge itself was the most important bit, even if you fail miserably.

What's it like to admin two games at once?

It is hard because of the time restrictions. I'm running my own business, the games are just my hobby. But at the same time this puts pressure on me to develop better tools to admin the games and thus I learn more and improve solutions for future games and for business as well. It is one of those examples "if you do what you love, you'll never work a day in your life".

What's your biggest issue as admin?

People. It is what many game devs are forgetting while they get into the job, that their biggest problem will be with their players. Once you stumble upon someone, who wants to spoil the game for everyone just because he can, you will lose all the willpower to go on. And dealing with such situations could be really frustrating.

How big is the player-base?

Where is Caroline? used to be part of a fan website, so there is no internal communication system between players (also it could lead to spoilers being left by players). Number of players is low - it is niche game.

SMFCO is relatively new (first version was made public late 2019), so with very limited marketing it is still searching for audience. The number of player have been rising in past months and now it is dozens of players weekly. There is forum for players to communicate, report bugs or suggestions. There is no direct communication system, because most users set up multiple accounts, so it would be hard to keep their messages following them through different accounts.

Any big plans for the future? 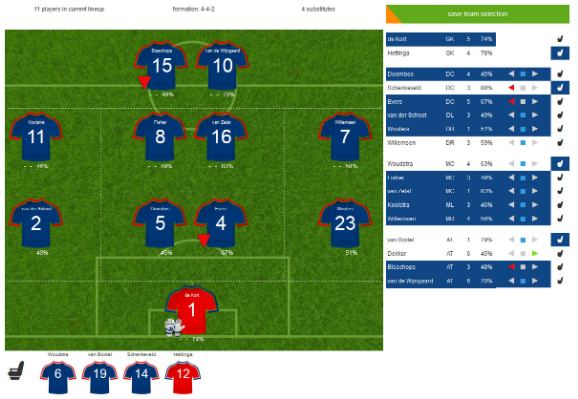 Yes, Football-o-Rama will return from hiatus in December 2020 / January 2021, Small Devil Inside should follow soon after - both multiplayer, so it will take some time to polish them. SMFCO is about to gain two more game modes: RPG (when you will distribute EXP points among your players manually) and East Block Challenge (which will take some explaining while it is finished).

0 comments on “Adam, the game producer”