Interview with Mark on Monsters & Mayors

Today we interviewed Mark, the one man team behind Monsters & Mayors.

Hi I'm Mark, a French software engineer. I used to work in London, but I left everything behind to travel the world and spend some time on my own projects. Covid kinda ruined the whole globe-trotter vibe I was going for, but in the end it allowed me to spend more time fleshing out my projects. I was heavily influenced by the many pbbg games I played during my childhood, some of them aren't probably known that well outside of France. My classic childhood games are Shakes & Fidget, Monzoo and Shinobi.

I work alone, my SO is kind enough to help out on design and UI/UX, and to double check my disastrous spelling.

But in the end, I handle all parts of dev and operation myself. I've tried hiring some artists from websites like fiver, with disappointing results. As I keep a tight budget the only high quality work I can expect has to come from me.

Any background in game development?

I did a lot of tinkering with the RPG maker suite as a kid and produced a few RPG games (none that were ever completed or saw a wide audience). More recently before leaving London and my job, I worked on some small online JavaScript mini-games (Fence War and Pathfinder). My first big solo project was an online minimalistic node based RTS game which I managed to play with a few friends in a pre-alpha version. It's discontinued nowadays due to me pursuing other projects and the high server costs to keep it running idly.

So how did Monsters & Mayors start?

I started working on Monsters & Mayors in Naples in October 2019, in one of the very few international trips we managed to make since the beginning of the pandemic. The first iteration was an ugly proof of concept with black and white placeholder art and very few features, I iterated from there to get where we are today. 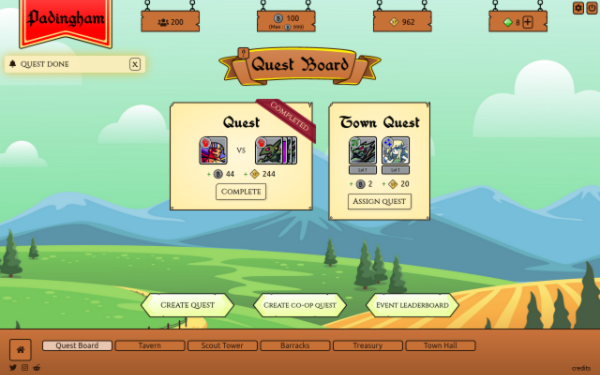 As mayor of your town, you create the quests and get to choose how easy or hard you make them! It's a twist on the classic RPG genre where you're always going from one quest to the next without any agency whatsoever. Here, you're the one taking the quest making decisions, you get to choose how much risk to take on a quest and who is better suited to succeed.

It's a game where you manage a town, recruit adventurers and send them on quests you design. As you complete quests you'll gather money and experience allowing you to upgrade your town and train your adventurers. Later on, you'll be able to compete against other towns, gain prestige and climb the leaderboard. 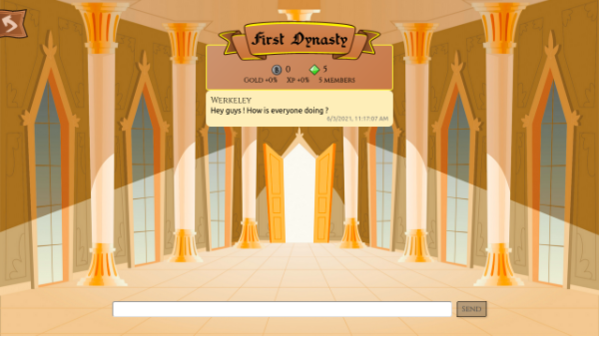 We currently have 3000+ players in the game. Players can communicate by forming councils and talking through the chat. Although I wouldn't call it communicating per se, they can also send cooperative quests to one another.

What is the hardest as a game operator?

Ensuring the least down time on the servers has been an uphill battle from the start and it's an issue I keep coming back to. At the moment I'm happy with the uptime we're managing to reach, but I know it's something I'll probably have to investigate and patch up again in the future.

Juggling the technical tasks with the marketing and promotional aspects has been my biggest learning curve. I've been learning a lot and trying to keep on top of everything but it's proven to be a real challenge, on top of stealing valuable time that could be spent adding or polishing game features. 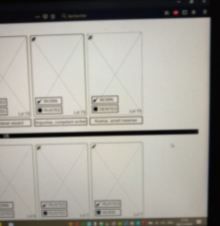 One of my very early testers caught a bug where one of his adventurer simply vanished. Fortunately, he had sent me the most blurry low quality photo of his screen the day before and I was able to recreate the character from that capture !

This other time, I shared the game with some friends just to show them what I'm working on, and they got so into it that they came back the day after with a beautiful 5 page pdf on their experience and bug reports !

Any plans in the making? 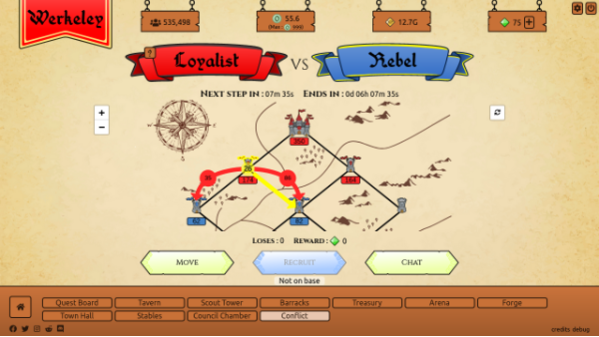 At the moment I'm focused on growing the community surrounding the game, and as I'm a one man team it's taking most of my available time. But I have a few ideas I'm slowly maturing and that I'll probably get into implementing once I find the time.

I've been thinking lately about a new event where players would randomly be assigned one of two opposing factions and battle it out on a node based battleground. I'd like to implement some kind of inter-council battles and/or competition.

I've also been thinking about expanding the game into a more RPG direction, where the player would send out teams of adventurers on a node based map with treasures, foes, puzzles and dungeons. Overall I'm not lacking ideas, just the time to implement everything, so I'll have to prioritise what ends up making the cut.

Did Mark get you interested? Head on over to Monsters & Mayors!

0 comments on “Interview with Mark on Monsters & Mayors”