Interview with Mica on Phoenix Beyond the Stellar Empire

Talk about a legendary game. Today we dive into an almost 30 year old game, Phoenix: Beyond Stellar Empire, with Mica. 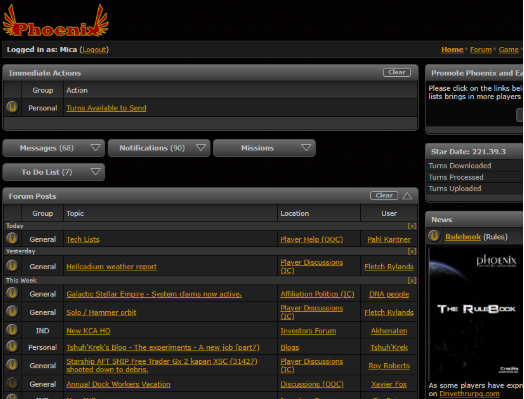 I'm Mica Goldstone â€“ It all started as summer job 27 years ago while looking for a teaching post (Physic A level). I was recruited to Game Master (GM), Beyond the Stellar Empire â€“ a play by postal mail game.

Initially it was a case of adding plot arcs and setting data such as planetary descriptions to the open-ended persistent universe sci-fi game which eventually morphed into coding.

I took inspiration from the many books, board games and roleplaying games around at the time. While I do not have favourite games per se, I do have two favourite settings â€“ Middle-earth and Call of Cthulhu. I have picked up many games over the years based on these themes. I just finished running the Darkening of Mirkwood campaign (AiMe), spanning 30 years in-game, and have moved onto Invictus, Call of Cthulhu set in Roman era. When we meet up for a boardgame day, it is a case of trying to get as many different games in as possible (the group has over 500 games between us, so there is a massive backlog of games we want to play).

Previous to Phoenix (and the original Beyond the Stellar Empire written in Qbasic), contemporary games were little more than MUDs, Doom and Hexen. Beyond creating my own boardgames and roleplaying games for fun, I had no experience. The idea of getting into gaming back in the early 90s was still fairly outlandish.

But you don't work alone, right?

We have a small team â€“ just the two of us actively working on the games in-house but working very closely with Skeletal Software. Having done this for many years, we know what needs doing but discuss player feedback, plot-arcs, game development and their ramifications. I deal with the more complex interactions along with programming functions that are run through the internal compiler of the game. I also manage the company.

The external company, Skeletal Software develops all the architecture for Phoenix. This is by far the lionâ€™s share of the work on the game. The company is phenomenal, creating code that is highly complex.

What is Phoenix: Beyond the Stellar Empir ?

Originally there was a paper version of Beyond the Stellar Empire run by an American company. Apparently they had lots of paper folders where they placed documents for all the positions in the game. They edited these by hand and posted results out to the customers. Sounds crazy and archaic. They converted this to Qbasic on primitive personal computers and achieved printed results that they posted out. This was the game the company took on. First this version was updated to take advantage of email (largely in the infancy of dial-up modems). A few years later with the game creaking under the times, we scrapped the code, taking our data to Skeletal and together designed Phoenix â€“ written in C/C++. Initially this was email but was upgraded to have the bespoke online interface.

I would describe it as a turn-based 4X game (Explore, Expand, Exploit & Exterminate) that resists attempts to pigeon-hole it. It is technically challenging to play simply due to the sheer number of things to do in the game. Players tend to describe it as strategy and role-playing game. For some it is about conflict and empire building while for others it is exploration. Then there are those that play it purely for the legacy and storylines.

It's a persistent universe that has been evolving for nearly 3 decades (it has its 30th birthday in July 2022). Unlike other games that are effectively zoos (where everybody can visit the same location and do the same things), the universe has been shaped by the player-base (with a fair amount of GM â€˜meddlingâ€™). This is as far as we know the worldâ€™s oldest continually active sandbox game.

We are working on two areas within the game, improving manageability of warfleets and developing individual characters. We also have a few other areas we want to tidy up and generally improve especially around the user interface.

In the brutal aftermath of the pandemic there are around a hundred veterans and the usual ebb and flow of transient free players.

Our players described the game in a pubmeet like this:

What's the hardest about this game?

A single persistent universe means we do not have the luxury of experimenting with concepts (and if they donâ€™t work they can be removed for the next rendition). There are features in the game that in hindsight we would rather have not added or at least not in the way they were implemented. We must be very rigorous at development stage â€“ considering all ramifications and potential exploits that may impact the game for years to come.

I suppose it's the complexity of the questions we get as well. There are so many features â€“ different position types, colonisation, research, fleet actions, interfaces and much more. Sometimes the question may be about an aspect of the game that was coded more than 15 years ago and havenâ€™t needed looking at since. An example â€“ a player was emailing turns using their own program to generate and email orders. Sometime these were seemingly being ignored by the game. As all other players have long since moved onto the online interface tracking down the problem meant considering things long since forgotten. Turns out the Internet Service Provider had implemented a spam filter on the automated email address without informing us (well, they did, they sent it to the automated email address).

Ooh â€“ pubmeets are always great. The Friday is Beer and Toot talking (we have really missed them during lockdown). The story goes that a player lost a bet and attended dressed as his character, the Legend that is Folkvar â€“ a sentient alien canine analogue â€“ imagine a cyber enhanced werewolf and you are about right. Enter a portly, middle-aged and inebriated man in a dalmatian onesie!

Players do some very funny things in the game, often when interacting with NPCs through special actions. They are rarely PC but do give me a chuckle. The least said about "Wally Warbuckle the workslave" the better. Then there is the rumour about a bunch of passive alien farmers buying tractor beams because they thought they were headlights for combine harvesters. More recently NPC smugglers were added to the game â€“ something for players to test their combat tactics on. Pretty much the first thing that happens is a force of 3,000 heavily armed veterans in exoskeleton jump suits and accompanying ordnance turn up to deal with some newly spawned smugglers. Instead of attacking they decided to negotiate??!!?? The entire smuggler faction consisted of a barely habitable outpost populated by handful of alien asteroid hoppers, looking to make some easy credits shipping things off-world without paying duty. â€˜Er, can you wait hereâ€¦.â€™ Responds the smuggler over the coms to the veteran commander, â€˜Boss, thereâ€™s some people to see you. No, I donâ€™t think they will piss-off, they seem pretty insistent.â€™

Did Mica spike your interest in Phoenix: Beyong Stellar Empire?