SpaceAlpha is a persistent open-world browser game where you build your space empire, colonize planets, mine resources, trade on market, climb the ladder, and much much more.

The game is still in alpha version, but it's already playable and it's totally free.

Updates are pretty frequent. Dev is working hard on it and takes the community requests openly. Dogecoin is currently one of the currencies you can trade with, so even without paying anything you can earn some Doge. Keep in mind that withdrawing it is still coming soon, but Dev already implemented NFTs on Opensea, so if it gets popular, you can probably earn a bit of pocket money with it. Other cryptocurrencies are planned, mostly smaller coins just like doge.

The game is still in it's early stage, anyone can catch up in no time.

The game is a bit inspired by Ogame, but less text based. It has a pretty nice star system, planets are circling around their star for example. Many 3d animated elements in it.

The community is pretty helpful. One of the biggest newbie alliance in the game currently Space Axolotl Family in the game, they will help new players with all the beginner infos. 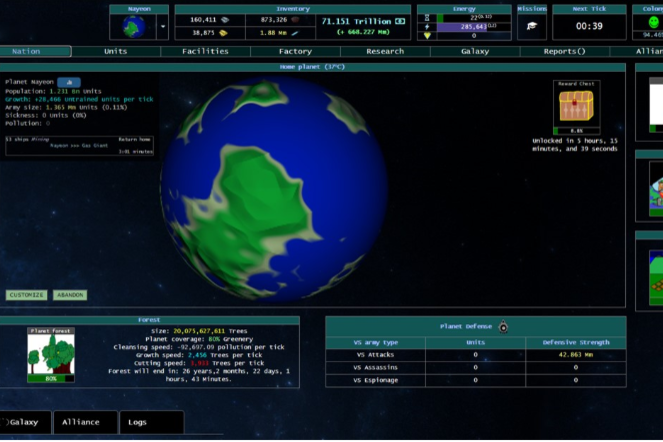 I played this game and from the on sought this feels like a cross between an incremental and a base building game. There are ranks and a PvP element that I have not explored yet.

The game is fun and there seems to be a lot to do. I found the most enjoyment by opening gifts sent to me via the win-game messaging system. I assume that when a player spends real money, everyither player in the game gets a gift box. (Unconfirmed). The gift boxes once opened give the player the opportunity to pick 1 of 3 possible items ranging from more money to more units.

There seems to be a lot to unpack from the game and I encourage you to try it out and see if you like it. I know I do.