We have a candid interview with Michael, the mystery man behind SimpleMMO.

Iâ€™m Michael and Iâ€™m the developer behind SimpleMMO and the director of Galahad Creative.

I first started web development back in 2008. Coincidentally, the very first experience I had in development was the result of dipping my toes in the creation of text-based games. Iâ€™ve always been a huge fan of them. I went through plenty of games since I was a child. Games like Torn City, Mafia Wars, GangsterRPG, PhantasyRPG, Boredest, Hobowars, and the likes were my go-to games. Iâ€™m still staggered to see some of them still alive and kicking today â€“ almost 12 years later!

Since then, Iâ€™ve been heavy into web and software development. Iâ€™ve studied it in both college and university. I then ran a relatively successful freelancing gig before I moved on to being the sole developer for a SME manufacturer. That was until I founded Galahad Creative.

My favourite game of all time is simply â€œThe Witcher 3â€. It is a classic. I love medieval esque games. I was so torn up at the ending that I replayed the entire game just to change it as I felt bad.

My very first game was built on an engine called â€œMCCodesâ€. No doubt many developers within the web-based game development sphere have heard of this. It was the go-to engine despite it being a buggy, clunky, awful mess. However, it made for a great learning experience despite its terrible flaws.

My first game was called â€œMilitary Nationâ€. I believe I was only 12 at the time and it was built with duct-tape and spaghetti. I ended up selling the game for Â£40 worth of Microsoft Points. Since then, Iâ€™ve dipped in and out of web-based game development, but I never built anything of actual value.

Who is helping you with all this?

Galahad Creative consists of 2 full-time employees and multiple contractors. We work in many different spaces within the digital world however SimpleMMO is our most successful project to date.

In-game, however, there is a fantastic team of administrators, advisers, and moderators. They ensure that a playerâ€™s experience in the game is as smooth as butter. They are the go-to people if someone needs help. They are a great bunch, and, without a shadow of doubt, the game wouldnâ€™t be where it is today without their help.

The game is also being translated into the Russian language. Our talented Ekaterina is translating almost every piece of content into Russian. However, due to the scale of the game, this undertaking is huge, and we donâ€™t expect it to finish before the end of this year.

It all started in 2017. I was discussing the old text-based games I used to play with a friend - mainly â€œMafia Warsâ€. I wanted to play something like it. I wanted a game that I could involve myself in for 5-10 minutes per day. It needed to be extremely casual. Essentially â€“ I wanted to play a toilet RPG game. It needed to be something I could play while I was on the loo. Despite my attempts in finding this holy grail of a game, I could not find anything. Simply nothing of the likes existed on the Android Play Store. That is when I got the idea of building my own.

That night, I sat down on my bed and started developing on my laptop. While doing this, I was also testing out a brand-new development framework, Laravel. I thought I would kill two birds with one stone. I donâ€™t believe I even slept that night. After about 10 hours, I had the core functionality nailed down which was the â€œtravelâ€ system.

Since that night, I just slowly worked on it every weekend. It became both a passion and learning project. It was never something that I planned to release. At least not initially. Usually, I created projects and then burned out after a couple of weeks. Never in a million years did I ever dream of building something that would go on to be so popular years later. Though, I suppose it was written in the stars due to the nature of how I entered web development!

Today the game has averaged around 300 online players at any given time. However, this is higher than usual because there is currently an event on-going. The average amount of players increases by about 20-30% during events.

COVID-19 caused a massive influx of new players last year. During itâ€™s very peak, the game had around 500-600 players at any given time. We reached over 500,000 total downloads on the Google Play store too. In an ideal world, it wouldâ€™ve stayed like that. However, the spike was simply unsustainable, and deep down I always knew that. I expected the active player amount to drop significantly but Iâ€™m extremely happy with how it turned out. It is now at a healthy and sustainable amount.

Players usually communicate either by using the in-game global chat feature, direct messages, or the official Discord server. Small gatherings of communities such as guilds also communicate via their own dedicated Discord server.

We have lots of exciting things in-store for SimpleMMO. I think the most significant thing we have planned is an official iOS app. We have a Trello that we update semi-regularly with what is coming this year and beyond.

What do you consider to be the most unique feature of SimpleMMO?

Most definitely the â€œTravelâ€ system. I donâ€™t believe I have seen it in any other game. The closest that I can think of (and it is what inspired the system) was a similar feature in a game called â€œBoringRPGâ€ that I played circa 2010.

I believe it is the most unique and arguably the most important feature of SimpleMMO because it gives the player a very easy sense of progression while doing almost nothing at all. It became the perfect toilet game! In the words of Borat â€“ â€œGreat success!â€.

Just take it slow. It isnâ€™t a marathon. The game was built so that you could make reasonable progress within a very short timeframe. You can hop on for 20 minutes and within that time you are able to travel for a short period, perform some quests, defeat some enemies, and then start up a job once you are finished for the day. The job allows you to progress your character even while you are not playing.

What are the biggest issues you encountered?

Oh, this question is so easy that I have many different answers! However, there are two answers that stick out more than the rest.

The first one is scaling the servers and changing the way the game works to accommodate literally millions of requests per day. After all, this game was initially built as a learning tool. All my errors that I had made years and years prior were starting to become more evident. The slightest change of code can cause massive choke points when dealing in the millions instead of hundreds. The influx of new players caused me to segment the game into separate servers and I had to heavily utilize caching mechanisms. All the problems were the result of the game initially being a learning tool. I am still fixing those issues even today.

This brings me to the second point:

It is a pain to work with and it still haunts me to this day. It was the second feature I developed in the game. It was built even before you could attack enemies. Heck, it was even developed before you could level your character.

The problem is how it is built. Every time someone gets an item, it places a single unique record within the database. That happens with every item. Now imagine millions upon millions of these items across hundreds of thousands of players. It starts to become incredibly taxing on the servers to sort and handle them all. It was the result of lack of foresight. At the time, I did not expect more than 10 players on the game, never mind 500,000. After all, why would I build a game for scale when I had no initial intention of ever releasing it? By the time I realized it was becoming a bit of a problem, it was too late to change anything.

Luckily, I have a plan on fixing this issue. It might take me months (maybe years!) but hopefully it should be solved eventually. In the meantime, I have made multiple refactoring changes to the system which has significantly increased performance.

What is the hardest part of the life of an admin for you? 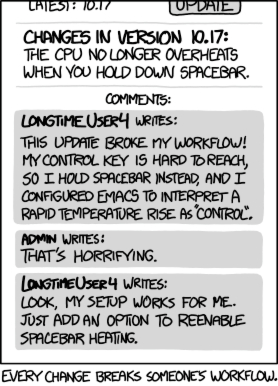 Probably dealing with the intense criticism that can come with the change of a feature even with the best intentions. Itâ€™s very common to receive negative, ill-informed knee-jerk reactions to changes in the game simply because people just donâ€™t like change. The criticism itself isnâ€™t what is hard. I welcome it. After all, nothing can improve if there is nothing wrong with it. The hardest part is that it can become quite a challenge trying to differentiate between constructive criticism that holds actual value, or the knee-jerk reaction of a player who simply disapproves of a change within the first glance.

If I were to guesstimate, Iâ€™d say a good 70% to 80% of complaints to changes are usually gone within the first few days simply because players get used to the new change.

I like to refer to this XKCD quite often.

Many! The game is essentially my play thing. I tease the community often. I enjoy a sprinkle of chaos from time to time.

One time, during the early months of SimpleMMO, I was working in an airport and I accidentally pushed out an update that gave everyone free gold every time an NPC died. My flight was scheduled within 15 minutes so I had to quickly push out a fix or it wouldâ€™ve been catastrophic! I learnt a very good lesson there. 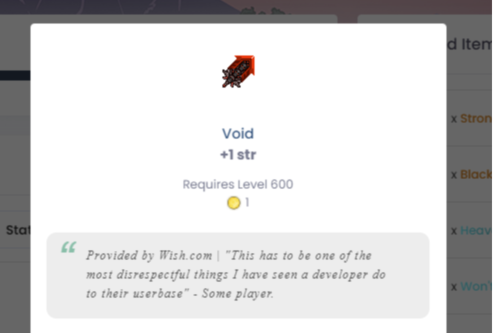 Another time, during April fools, I fooled everyone by distributing a fake item which was a replica of the most powerful item of the game. Most people enjoyed the small gag but one player in particular did not like it in the slightest.

They said, and I quote, â€œThis has to be one of the most disrespectful things I have seen a developer do to their user baseâ€. Feeling a little remorse in my actions, I done what any other person wouldâ€™ve done.

I put the quote on the item itself.

Does Michael's story make you interested? Check out SimpleMMO!

1 comments on “Interview SimpleMMO with Michael”