Read more about Street Racerz(SR) through the eyes of Mike, the developer!

Hi! My name is Mike I'm the current developer over at Street Racerz(SR). I have been into games and the development of games for quite a while. I've owned games in the past (mafia types mostly). I enjoy games like Need for speed, Call of duty and a couple of online games, but itâ€™s finding time to play them at the moment.

I first got into game development roughly around 2007 when Street Racerz was first made and owned by a fella called Oliver (Olsrey). I first started out doing a mafia game. It was an old broken game called World Legends and basically got told if I could fix the game and get it to work I could be part of a development team and work on another game. I ended up being one of the lead developers of that game.

A few others I made a game called Gang Mania. That was quite big around the time gangster paradise was booming and that was my main inspiration for Gang Mania until it closed 3 years after it opened due to work commitments.

I took over Street Racerz in 2017 after the previous owners destroyed the database and caused massive dataloss. I managed to get the game back online after a couple of days work with the database. Sadly we lost over 25.000 accounts and have had our fair share of struggles along the way. We are very much on the up now!

The game has had a full redevelopment from desktop to mobile and now on the Android market. We are also aiming to get the iOS done at some stage soon (price depending really).

Do you get any help? 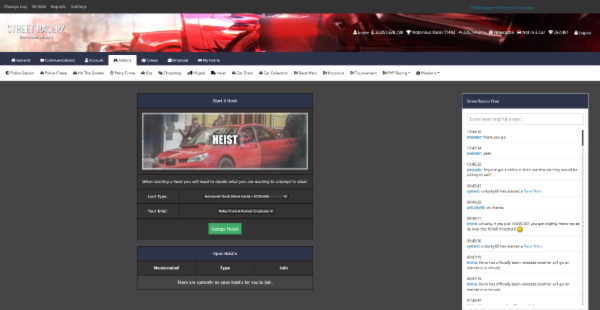 I currently work on my own. Iâ€™ve had other people working along side me in the past, but it never really lasted long due to different visions on the direction of the game. I have had some bits of work done by outsourcing. I try not to rely on others to be honest unless itâ€™s something out of my skill set. Then i will see if thereâ€™s someone available to build or design it.

My main goal with Street Racerz is to bring a fun enjoyable game for people to just have a laugh with other likeminded people who have similar interests in cars racing and all things filled with adrenaline. I wouldn't say I'm a professional by any meaning of the word but I give it my best and that's all we can do! I guess I come up against struggles like every developer, I imagine. We get there in the end.

So what is Street Racerz? 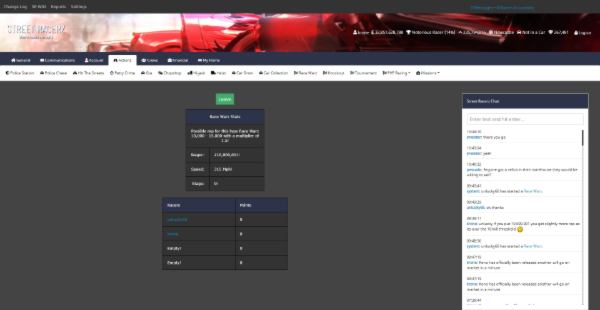 If I were to describe Street Racerz to someone who hasn't played a PBBG before I would probably say: itâ€™s a grind style game, but the rewards for your efforts are always worth it. Like with any game if you want to get to the top you have to work for it. Nothing is ever given!

According to daily numbers we get anywhere between 30 and 45 logins a day. Hourly itâ€™s anything from 5 to 20 an hour playing depends on time of day etc.

We have an in-game chat system and full player to player mailing system setup to help players communicate with each other.

We have quite a few unique features to be honest. Our most unique features are a chopshop prestige system, daily/weekly missions and the release of the Android app is another big feature of our game.

I plan to try and get the iOS app released at some stage this year if all goes well. I also have some new updates coming such as prestige island that will allow users who are prestige level 1 and above to visit a whole new island within the game. That has some small perks to it such as slight timer adjustments small rep increases and such.

What is the hardest part of being an admin for Street Racerz?

The hardest part of being admin/owner of Street Racerz I'd say would be trying to keep a healthy balance within the economy and player happiness. Sometimes I try to make everyone happy which sometimes doesn't go as planned. I guess the saying is correct: you can't please everyone.

Did Mike get your racing-vibes going? Head over to Street Racerz(SR)!

Played the game in the old days. Its good to see what micky has done with it and the progress hes made. Its a good game that can be tedious at times due to the grinding nature. But with the overwhelming support of the players and admins success within the game is totally possible

I've been around sr since I was around 15, when the original owner had the game and its been 14 years and I still have the same love for the game now as when I did when I was 15, the staff are brilliant and always willing to help, and mikey is always open to suggestions and ideas I'd highly recommend joining the game and having a whirl who knows you might just find the game you've been looking for..

Ive been around on the game right back from start to now ,its progressing really nicely with new stuff being added. Ive made a good few friends over the years from the game , its very friendly and everyone helps each other when needed. The game itself is easy to play but hard work is needed to gain where you want to be but adds to the fun of it ,beating records and gaining trophies along the way

I have played street racerz for many years and have seen it grow from the original game to what it is now. The game is a great game not only for playing but also for meeting new people from all over the world.

I have made some great friends and meet some brilliant people trough this game and everyone plays, chats but also helps each other out with what ever they need in game.

Im the admin for the game. Back when the original owner sold it to 2 people to try and make work they destroyed everything, haveing being in street racerz more or less from the start of its journey mike had asked me to be his admin, at first i wasnt sure however he given me full day to day running of the game while he does the stuff no one ever sees. .
We have had many hurdles between us we have had to cross. The balance of keeping a game economy good is a very hard balnce but somthing we think we have mastered that.

The staff i personally have chosen, we dont dont know each other personally whats so ever which is what make sr more unique as opinions are easier to put across.

Street racerz is a joint effort between everyone not just the staff that help me, we do this in our free time and enjoy the community spirit street racerz has.

We are growing slowly and progress has been very good, micky id describe as a excellent coder, he wants only whats best for the players. We are here to have a laugh and a joke and just play the game micky rebuilt so why not come and sign up and see what we have to offer.