Interview with Dave about Made Man Mafia

Dave is building Made Man Mafia as we speak! Read more about this interesting new browser game!

I see myself as an impatient optimiser. I live for little trees, snooker, and PC games. I enjoy discovering something that's not working well and improving it. That mindset is well suited to balancing a game, as well as everything else in life. Although it's been a few years since I played any browser game, I still have the player in me that's looking for more. I started playing browser games in 2005, but have been into PC games since I saw my first one at the age of 4. I was originally inspired by TheMafiaBoss and MobsterBoss but was really frustrated at their lack of development. MobsterBoss now sleeps with the fishes because they failed to move with the times. I played Path of Exile almost solidly for about 4 years and was impressed with how their developers would freshen the game up on a regular basis. That too, at least for me, came to an end when I got bored of waiting for an in-game trading system. People would be trading on the forums, and it was generally a pain in the ass which detracted from the fun of playing. I firmly reject the idea that games should be drip-fed or progress throttled to keep players interested. The best games I ever played were those where I was thrown in the deep end and learned through failure.

I started helping a friend run his game back in 2008 and began tinkering with the coding. By 2010, I'd launched my first game (Mafia Inferno) with my partner Tactics. I was in charge of the development, and he'd do the promotion side of things. In that first year, I had a real fire in my belly, and reworked many of the game systems to make the gameplay more fun. I soon learned, however, that you can move too fast, and we had problems attracting new regular players. We had introduced a learning curve to players who were used to the flat of similar games. The players who adapted seemed to really enjoy the new systems we'd put in, and the game is still supported to this day, more than 11 years later. I've also been offering coding services to the community and have worked on dozens of games over the years.

So now Made Man Mafia?

In my mind, it started in about 2012. It's only during lockdown that I've really had the opportunity to really knuckle down and build the new script. I have tonnes of ideas that I wanted to implement, but weren't right for my previous game. Summer 2020 was when I really broke ground and I've been at it for about a year now. I'm aware that if I add everything I want to add, the game will never launch. A game is never finished, the time has come to let it stand or fall, and when it does well, add all the other stuff later.

Right now, it's a solo venture, although I've had lots of help with testing the game from players I keep in contact with. I've been fixing games, running them, and writing new features for about 12 years now.

I do all of the coding and server management myself. The codebase, I built from nothing, and it's awesome to be able to work on something that isn't inherited. I lean more towards the back end of things, so I'm conscious of the need to have friends look at the site and tell me where it looks too 90s. I outsource graphics, because nobody wants to see my stick-men, and my time is better spent on new features. I spent a few days sifting through Fiverr responses in June. It's definitely a challenging process, you have to go in knowing what you want, and not be swayed by all the promises.

The launch will be towards the end of September 2021, so it's a great time for people to join and get in on the ground floor. Players may communicate in game through private messages, public boards, and they may also create their own discussion areas for their groups. We encourage the use of discord or skype for family chats in addition to the in-game boards, and are working on further integration with Discord. There's a lot of opportunity there.

What makes it unique?

A couple of things really. Firstly, it's a blank slate - a great place to start. There's no bloat and not really much restriction to where we can take the game. Many developers will have their hands tied by their predecessors, and it's disappointing for players when games cease to evolve. Made Man Mafia is free of all that, and I'm excited to see what happens. 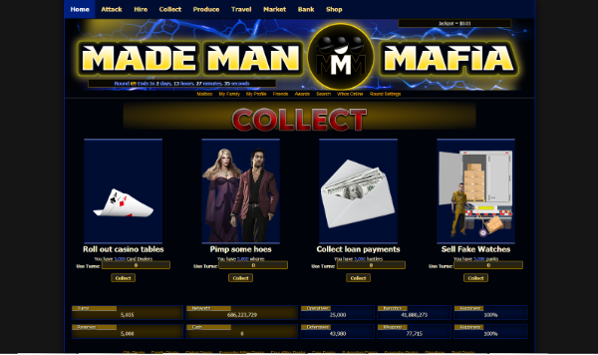 Secondly, and I'm aware this sounds really big-headed, myself. I have the experience in developing new games and features, seeing what works, and what doesn't. I love it when someone comes to me with an idea, and we turn it from an idea into reality. That process is what keeps me developing games after all this time. There's always some improvement to be made, and usually, a new feature that can be built to turn a weakness into a strength. I know what it's like to really love playing a game, only for it to stagnate and that drives me to keep things exciting.

Made Man Mafia is my way of showing that browser games can still be fun. It's a journey together into the unknown really, and it's just starting. The goal is to make it fun, intuitive, and make some memories - all in a way that still exists in another 10 years. You take the role as a Mafioso here, and it's up to you where you end up. There are records to be written, prizes to be won, money to be made, toes to step on, and friends to meet along the way. Every legend starts somewhere, and in Made Man Mafia, legends will come in all guises.

Any walls you run into? 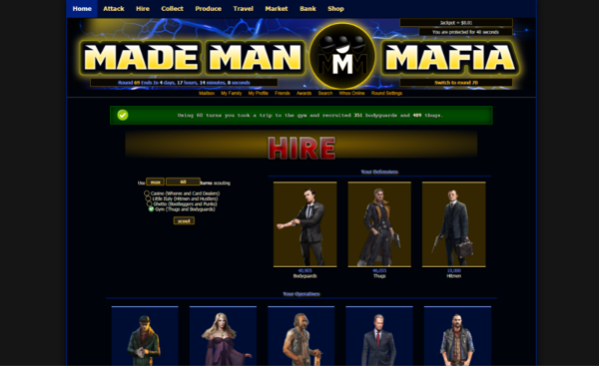 The fact that there are only 24 hours in a day, and I only function highly enough for about 6 of them. The rest of the time is spent in a coffee trance, wondering which moron coded the mess I'm trying to unravel. Yep, it was me. I also aimed really high with this script - my list of requirements started out at about 40, and ballooned to well over 300 jobs, and even after completing a hundred, 150, 200 jobs, it's difficult to keep that vision and plow through.

The hardest part for me will be doing the marketing. It's a new facet of the game that I'll be learning as I go this time. I expect to start small, but want to learn how to grow the player base large and keep that many players happy. With everything else, I've learned a lot from doing it before. The other difficulty I expect will be launching a text-based game in 2021. Gaming is completely different to 15-20 years ago, but I'd like to prove that this kind of game is still viable, fun, and has a future.

Step one is to get players playing, and start collecting more feedback. The more we know, the easier it is to build that path forward. My development plan is largely collaborative so player suggested features will play a big part. I really dislike the cut + paste approach that many games have taken over the years, and pride myself in re-working old features and ideas into something new. When people approach me to build features, no two customers get the same thing. Every game is different and the development must fit the game, not the other way around.

The remainder of the development will be areas of the site that are underperforming, and updates will be targeted and tailored to improve said areas. Early developments are likely to be targeted at building new community features, improving our prizes, and developing a challenge system that's challenging, not grind-y.

Did Dave give you energy for a new mafia game? Check out Made Man Mafia!

1 comments on “Interview with Dave about Made Man Mafia”

Thanks to the NewRPG team for the opportunity to spread news of Made Man Mafia!
Launch is planned for Sunday 3rd October, currently preparing for the first round. Stop by and check us out!